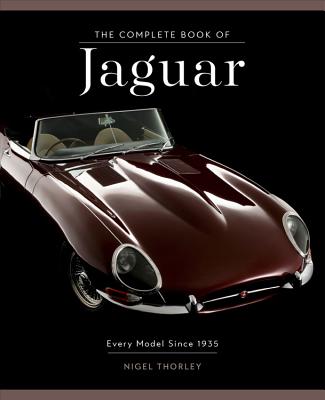 The Complete Book of Jaguar

Every Model Since 1935 (Complete Book Series)

In 1935, when a small company in Coventry, England, launched a sporting saloon (i.e., sedan) called the Jaguar SS, it set in motion an inexorable process that would lead to Britain’s most beloved line of high-performance automobiles. The Complete Book of Jaguar covers the SS and all of the Jaguar's subsequent production models, from the original SS Jaguar to today’s F-Type sports cars, F-Pace SUV, X-Type sedans, as well as concept cars.

As with other books in the Complete Book Series, author Nigel Thorley organizes the content chronologically with entries for each year. Narratives for each discuss the cars and technology, while spec tables highlight key technical and performance specifications.

Originally begun by a couple of motorcycle enthusiasts—William Lyons and William Walmsley—as a firm called the Swallow Sidecar Company, Jaguar would become one of the world's most celebrated automakers. In England’s bleak postwar years, Jaguar became a shining star—first with its XK120, followed by the XK140 and XK150. Sporting sedans like the Mark 2 and Mark X set the bar for luxury four-door transport in the '50s and '60s. Then Jaguar stunned the world with the achingly beautiful E-Type in 1961, a genuine 150 mph super sports car.

Along the way, the company competed on road courses around the world, going head to head with greats like Ferrari and Aston Martin. Though Jaguar lost its way periodically in the modern era, it has bounded back stronger than ever in the twenty-first century with a strong lineup, including the new F-Type sports car and F-Pace SUV.

The Complete Book of Jaguar is the essential guide to this important chapter in the history of sports and luxury automobiles.

Praise for Nigel Thorley's Jaguar: All the Cars:

“An excellent introduction to the cars of Jaguar." – Practical Classics

"A comprehensive and easily digested encyclopedia of the British marque." – Classic Car Weekly

"Anyone contemplating the purchase of a Jaguar, no matter of what era, needs to buy this comprehensive guide.” – Retrospeed magazine

"Highly recommended. This wonderful, photo-packed and informative book will appeal to any car enthusiast who has ever admired a Jaguar."—A View From the Windshield

Nigel Thorley is a well-regarded motoring historian with a particular interest in the Jaguar marque. Having owned sixty-one examples of the brand since the age of 17, including 16 MkIIs, his knowledge and expertise of these cars is second to none. Nigel has written twenty titles on the marque, has contributed to TV and radio programmes, regularly provides talks and seminars on the models, and is a prominent founder member of the Jaguar Enthusiast’s Club. He also edits their prestigious monthly magazine, Jaguar Enthusiast.