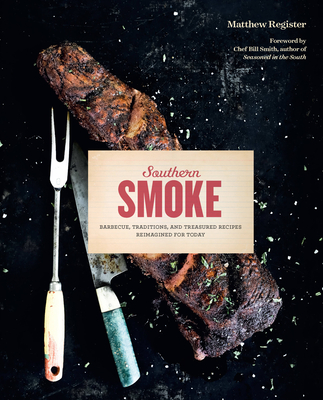 Informed by the history of classic southern recipes, Southern Smoke is an intriguing dive into the barbecue of North Carolina, the Lowcountry, Memphis, and the Delta, with must-try meats, sides, and desserts.

For years, Matthew Register, the owner and pitmaster of Southern Smoke Barbecue, has been obsessed with the history of southern recipes. Armed with a massive collection of cookbooks from the 1900s and overflowing boxes of recipe cards from his grandmother, he hits the kitchen. Over weeks, sometimes months, he forges updated versions of timeworn classics. Locals and tourists alike flock to his restaurant in Garland, North Carolina (population 700), to try these unique dishes. Now you can make them all at home.

In this book, Matthew teaches the basics of smoking with a grill or smoker. He outlines how to manage the fire for long smoking sessions and shares pitmaster tips for common struggles (like overcoming "the stall" on large pieces of meat). He then explores iconic barbecue regions and traditions: And, of course, what barbecue spread is complete without baked goods? The final chapter includes everything from skillet cornbread and benne seed biscuits to chocolate chess pie and pecan-studded bread pudding.

Whether you've long been a fan of barbecue or are just starting your own barbecue journey, Southern Smoke offers a unique collection of recipes and stories for today's home cook.

Chef Matthew Register and his wife Jessica own Southern Smoke BBQ, which has been featured in Food & Wine magazine, on The Today Show, and was named one of the top 25 BBQ restaurants in the US by Men's Journal. They also own South Cateringand the Southern Smoke BBQ food truck. Matthew has always had a passion for fine food and the outdoors, and he prides himself on incorporating fresh, local ingredients. Raised in rural, Eastern North Carolina, he grew up in a community that formed inseparable bonds through deep-rooted traditions at the dinner table. These traditions are ones that he hopes to sustain, not just for his three young children, but for his community and those who dine with him, as well.