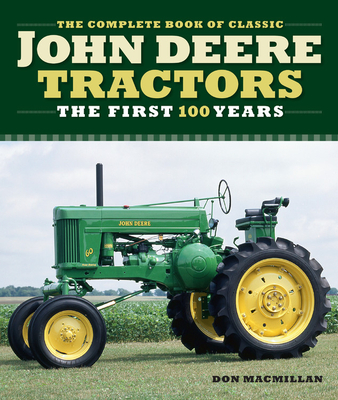 The Complete Book of Classic John Deere Tractors explores the range of iconic "green tractors" with which Illinois-based John Deere has become one of the world's most recognizable brands.

In addition to the Waterloo Boy, you'll witness the entire 40-plus years of two-cylinder “Johnny Poppers,” from the 1924 Model D through the 830 Series models in 1960, and the styled tractors of the prewar and postwar years. Also featured heavily are the groundbreaking New Generation tractors launched to much fanfare in 1960 and their successors, the New Generation II lineup with their Sound-Gard cabs. Standard, row-crop, orchard, and even a selection of experimental models…they're all here. In addition, you'll find coverage of John Deere’s rich international heritage, with tractors produced in Spain, Germany, and Australia.

Illustrated with incredible color photography and period advertising, The Complete Book of Classic John Deere Tractors isan essential edition for the library of any Deere fanatic.

John Dietz is a writer and photographer based in Arden, Manitoba, Canada. He has authored the books John Deere Two-Cylinder Buyer’s Guide and Classic John Deere Tractors, and he writes for several agriculture magazines.

Andrew Morland is a freelance photojournalist. He is the photographer of numerous Voyageur Press tractor books, including The Bigger Book of John Deere, Vintage Ford Tractors, and Classic Tractors of the World. He lives in Somerset, England.

Randy Leffingwell wrote his first book, American Muscle, in 1989 while still on staff at the Los Angeles Times. Since then, he has authored another 47 titles, covering subjects from sports cars to motorcycles to farm tractors. Leffingwell is considered one of the top Corvette historians working today, and he enjoys a close working relationship with Chevrolet as well numerous other manufacturers. His previous Corvette titles include Art of the Corvette, Corvette: Seven Generations of High Performance, Corvette Sixty Years, and Legendary Corvettes. He lives in Southern California.