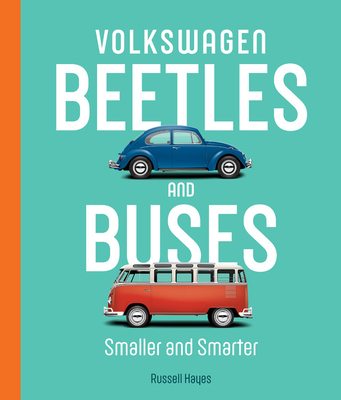 This illustrated history celebrates the 75th and 70th anniversaries of Volkswagen's two most iconic vehicles, from the first Beetles spearheaded by Ferdinand Porsche in the 1940s to the buses that became synonymous with a generation.

Volkswagen is one of the most beloved brands in motoring history, thanks largely to two instantly recognizable vehicles: the Beetle (a.k.a. Bug) and the Bus. More than 23 million VW Beetles have buzzed into the world since 1945, while the VW Bus presaged the minivan by thirty-plus years. Volkswagen: Beetles and Buses examines and celebrates all aspects of the vehicles and the many cultural associations that have swirled around them for more than seven decades. The diminutive rear-engined and easily mass-produced Beetle became the most popular imported car in America during the 1960s. Its success was due to its familiar face, its wildly clever ad campaigns, and the sheer numbers produced. The equally compact yet spacious Bus (a.k.a. Kombi, Microbus, Type 2, Transporter, and simply “van”) has won millions of fans around the world with its practicality, simplicity, and design.

In this beautifully illustrated and authoritatively written celebration, author Russell Hayes looks back at the vehicles while focusing on the classic air-cooled VWs that ran into the late 1970s. Along the way, readers witness the Beetle and Bus at work and at play and learn about vehicle development and growing roles in popular culture, including star appearances in films like The Love Bug, Little Miss Sunshine, Footloose, Fight Club, The Big Lebowski, and Fast Times at Ridgemont High, as well as television shows like Lost and Once Upon a Time and on the covers of the Beatles’ Abbey Road and Bob Dylan’s Freewheelin’ album. The story is brought up to date with coverage of the New Beetle and plans for the VW Buzz, a modern electric version of the iconic Microbus due in 2022.

Volkswagen: Beetles and Buses deserves a place in the motoring libraries of VW owners, automotive enthusiasts, and those simply interested in pop culture. It's the ultimate illustrated history of these beloved vehicles.

Praise For Volkswagen Beetles and Buses: Smaller and Smarter…

"The book is a pleasant, fun read chockablock with wonderful illustrations, many of which we’ve never seen before, and the photos and text that will teach you many interesting facts and tidbits that you probably didn’t already know—it did for me—about two seemingly simple vehicles that literally changed the world."—JoeFaraceShootsCars.com

"All in all, a comprehensive showing and telling of the story of Volkswagen Beetles and Buses."—Helen V. Hutchings, Speedreaders.Info

"The entire book is an interesting, ejoyable read that is nicely and generously illustrated. Happily it includes some of the more esoteric models as well as those more commonly recognized and even includes pages on what may be in the offing going forward from Volkswagen."—Helen V Hutchings, Antique Automobile

Russell Hayes divides his time between writing (mostly on classic car and consumer subjects) and TV production (he has worked on Top Gear and Driven). He lives in London, England.