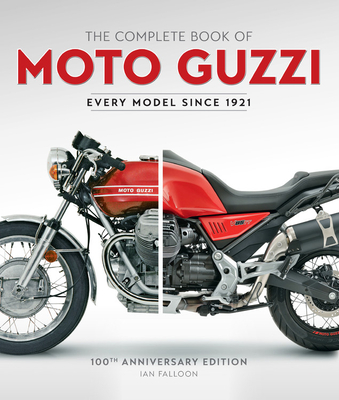 The Complete Book of Moto Guzzi

The Complete Book of Moto Guzzi: 100th Anniversary Edition, Every Model Since 1921, written by respected motorcycle expert Ian Falloon, offers enthusiasts a thorough review of Guzzi’s storied 100-year history via all of its production models.

This new edition of The Complete Book of Moto Guzzi includes a 100th anniversary introduction, new photography, and additional pages to cover the newest models from 2018 to 2020. All of Moto Guzzi’s production models are covered in detail, including the groundbreaking Falcone, the V-8 Grand Prix racers, the V7 Sport, the Ambassador, the Eldorado, the Le Mans, the Daytona, right up to today’s the complete range of modern bikes including the V7, Griso, Stelvio, and V9.

“Falloon has created an authoritative resource that is also a collector-worthy Centennial celebration of the brand.”

"...certainly a must-have for every Moto Guzzi lover."—RideCT.com