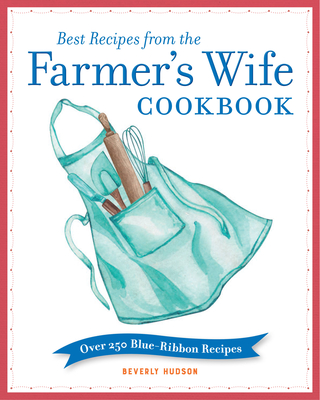 This revised, four-color edition of The Farmer’s Wife Cookbook features country-kitchen recipes that appeared in Midwestern America’s Farmer’s Wife magazine between 1893 and 1939.

Beloved by home cooks since the magazine was first published, the recipes resonate now more than ever as many of us—from the countryside, city, and in between—return from quick meals on the go to slow, scratch cooking; fresh and wholesome ingredients (often homegrown, self-made, or from the farmer’s market); and the tradition of Sunday dinners and eating together with family and friends.

Best Recipes from the Farmer’s Wife Cookbook brings together the most popular, easy-to-follow recipes and variations along with dozens of menus that originated in farm kitchens nationwide and appeared on the pages of the magazine over its publication around the start of the twentieth century. This new edition is illustrated with color photographs and completely redesigned to appeal to a modern-day cook who wants to bring the warmth and family of the Farmer’s Wife to their own kitchen.Recipes include:

Wherever you live, this down-home cookbook is the perfect companion to a renewed appreciation for family life and comforting, back-to-basics cooking.

Beverly Hudson, who grew up in Minnesota and currently lives in Minneapolis, is an avid cook and Instant Pot fan. She lives with her husband and two cats and this is her first book.

Editor Kari Cornell has been knitting and collecting vintage patterns for years. She lives in Minneapolis with her husband, two sons, and a beagle.