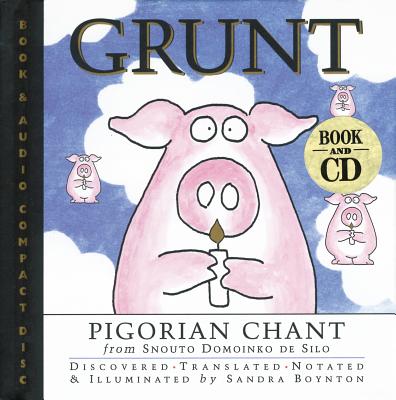 A delightfully silly, good-natured parody of the recording phenomenon Chant and other works that put Gregorian music on the charts, Grunt is a book and CD set that combines Sandra Boynton's inimitable way with farm animals and a satirical sense that comes deliciously out of left barn.

In a far-off valley live the obeisant Domoinkan Pigs of Snouto Domoinko de Silo. Here, twelve times a day, these simple swine grunt the unadorned, ethereal music of Pigorian Chant (translation included). For occasions from the first mealtime (Op-slay ime-tay. Et's lay eat-ay. Um yay, um-yay.) to Nox Animaliae, when they're joined by all the animals in a harmony that dates back before the time of Caesar Hogustus, the pigs chant.

Listen, look at Sandra Boynton's delicious illustrations, and laugh. It's what to play whenever you're feeling disgruntled.