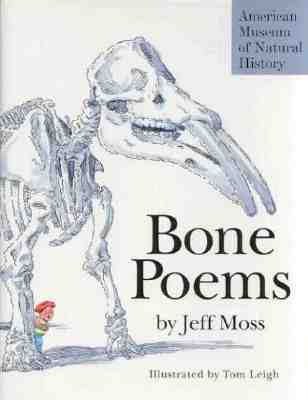 Jeff Moss is the children's poet laureate (New York Newsday), a Sesame Street co-creator, and the inspired author of The Butterfly Jar. Now he presents a brand-new collection of prehistoric whimsy and rhyme. Bone Poems is a joyous collection for every kid who loves dinosaurs, plays on words, and the delightful incongruities of science and nature. There's Gotta Find a Footprint, A (Mostly) Dinosaur Alphabet, and I'm Going to Ask a Stegosaur to Dinner. There's a dinosaur math quiz, free verse about a basketball-size dinosaur egg, one of the world's shortest poems with one of the world's longest titles. And, showing the kind of imagination that is completely in touch with kids, a poem about how scientists measure the intelligence of early primates by filling the skull with uncooked rice. Yucch! Illustrated by Tom Leigh

Tom Leigh has illustrated many Sesame Street and Muppets books and is also a longtime illustrator of children's educational books. He lives on Little Deer Isle off the coast of Maine with his wife, four dogs, and two cats.

Jeff Moss is a co-creator of Sesame Street, and he has served as head writer and composer-lyricist for the show. He has won fourteen Emmys and written the songs for four Grammy-winning records. Jeff has gained a place in the hearts of parents and kids with songs such as "Rubber Duckie," and "I Love Trash." Hailed by New York Newsday as "the children's poet laureate," he has written more than a dozen Sesame Street books and is also the author of the best-selling children's poetry collections The Butterfly Jar and The Other Side of the Door, as well as Bob and Jack, Hieronymus White, and The Dad of the Dad of the Dad of Your Dad, stories in verse. His music and lyrics for The Muppets Take Manhattan earned him an academy Award nomination. Jeff Moss lives with his wife and son in New York City, very near the American Museum of Natural History.
Loading...
or
Not Currently Available for Direct Purchase