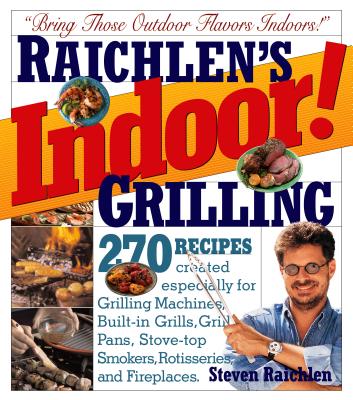 SPIT-ROASTED PRIME RIBS, crusty on the outside, moist and tender inside. Yes! CHICKEN UNDER A BRICK, heady with smoke and spice. Yes! CURRY-GRILLED LAMB KEBABS, POTATOES ROASTED IN THE ASHES, BAYOU WINGS, VANILLA-GRILLED PINEAPPLE WITH DARK RUM GLAZE—all of it infused with honest-to-goodness real-grilled flavor, and all of it cooked indoors. Yes! Bursting with bold new ideas, 270 righteous recipes, and hundreds of tips and techniques—from how to season a cast-iron grill pan to buying brisket cut from the "flat"—Raichlen's Indoor! Grilling brings the guru's mastery of live-fire cooking indoors. New every day's a good day to grill.

Steven Raichlen is the author of the New York Times bestselling Barbecue! Bible® cookbook series, which includes the new Project Fire, Barbecue Sauces, Rubs, and Marinades; Project Smoke; The Barbecue Bible; and How to Grill. Winners of 5 James Beard awards and 3 IACP awards, his books have been translated into 17 languages. His TV shows include the public television series Steven Raichlen’s Project Smoke (currently in its 3rd season); Primal Grill; and Barbecue University, and the French language series Les Incontournables du BBQ and Le Maitre du Grill.  Raichlen has written for the New York Times, Esquire, and all the food magazines; he teaches sold-out Barbecue University classes at the Broadmoor in Colorado Springs. In 2015, he was inducted into the Barbecue Hall of Fame. His website is www.barbecuebible.com.