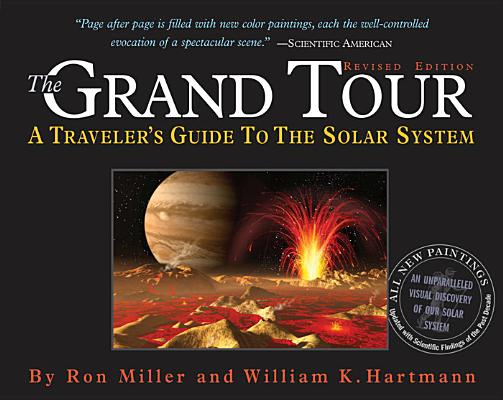 A Traveler's Guide to the Solar System

Hurricanes so enormous that the earth itself could be lost in one; a volcano larger than the state of Missouri and higher than Everest; a planet with a billion moons; a planet that rotates on its side; worlds made of solid ice; a world where it rains gasoline. These are not inventions of fantasy or science fiction, but are places that really exist-in our own solar system.

Now with 190,000 copies in print, here is a spectacular Grand Tour of the solar system featuring a unique blend of science and art-photographs along with dazzling full-color paintings, drawings, and maps based on years of astronomer William Hartmann's research, personal observation, and interviews with colleagues.

In text and diagrams, too, The Grand Tour explains how the strange and uncanny worlds on the journeys came to be, and what it would be like to actually set foot upon them today. The book includes an atlas of the planets and their satellites, and of the Earth's moon.

Complete with a selection of previously unpublished photographs taken by the Apollo astronauts, and by the Mariner, Viking, and Pioneer planetary probes, The Grand Tour is unique and breathtaking, majestic and eerie, and wonderful, taking the reader to more, and to the beyond. Selection of the Book-of-the-Month Club, Quality Paperback Book Club, and Newbridge Book Club.

William K. Hartmann is the author, most recently, of A Traveler’s Guide to Mars and co-author of Out of the Cradle. He is an internationally known scientist, writer, and painter, and winner of the first Carl Sagan Medal from the American Astronomical Society. He has an asteroid—#3341—named after him. He lives in Tucson, Arizona.

Ron Miller, co-author of Out of the Cradle, is an illustrator known for his astronomical and science fiction paintings, and served as a production illustrator for the movies Dune and Total Recall. He is a fellow of the British Interplanetary Society and member of the Academy of Astronautics. He lives in King George, Virginia.
Loading...
or
Not Currently Available for Direct Purchase