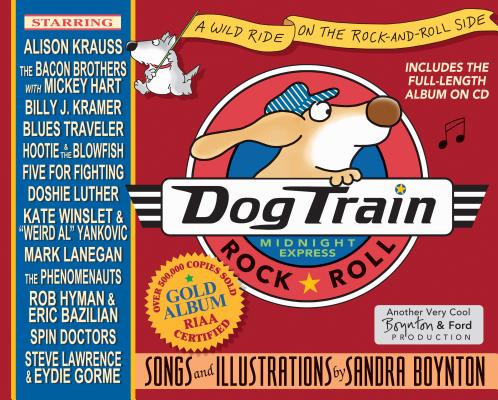 A Wild Ride on the Rock-and-Roll Side

Full of attitude, full of fun, and all lit up with star power, Dog Train is a Recording Industry Association of America Gold Album with 600,000 copies in print. Another great book-and-CD production by Sandra Boynton, it features all original songs recorded by big-name acts and great voices.

Blues Traveler performs a stomping version of the title song, a moody rock journey that Boynton wrote especially for them. And then there’s Alison Krauss with “Evermore.” And Steve Lawrence & Eydie Gorme—really—who do the “Boring Song.” The Spin Doctors, who channel rock’s rebellious side—with a taste of punk—for “Tantrum”: “No No No, I don’t want to, I don’t want to./No no no, I don’t want to, no no./Leave me alone. Leave me alone./LEAVE ME ALONE.” And the sweetly unexpected pairing of “Weird Al” Yankovic and Kate Winslet (yep, Kate Winslet) as a duet singing “I Need a Nap.”

The full-color book features a portion of each song’s lyrics set as a little story, illustrated with Boynton’s irresistible hippos, cows, dogs, and more dogs. Full lyrics appear in the back.