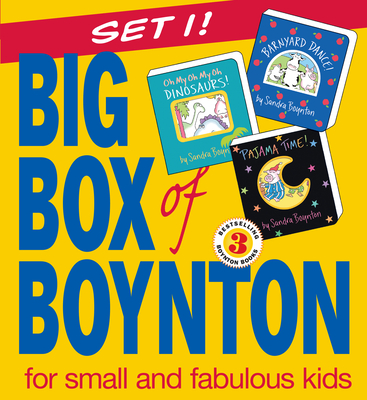 Barnyard Dance! Pajama Time! Oh My Oh My Oh Dinosaurs! (Boynton on Board)

Three bestselling and beloved Boynton board books, in a giftable boxed set!

Together in a bold, happy slipcase: Barnyard Dance!, Oh My Oh My Oh My Dinosaurs!, and Pajama Time!

It’s the wonderfulest introduction to the world of Boynton—square-dancing pigs and sheep, wide-eyed dinosaurs, and a sleepy, PJ-clad menagerie. Big, bold, humorous, rhyming verses, and those ever-whimsical illustrations that have made Sandra Boynton one of America’s best-loved artists. A box of pure read-aloud pleasure.

Just the right gift. Perfect for baby showers. Irresistible for a newborn, or for a one-, two-, even a three-year-old’s birthday.