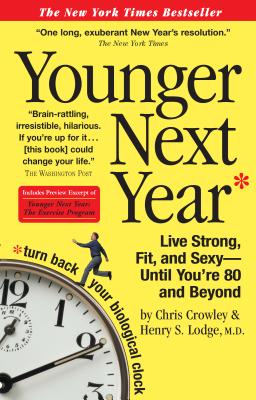 Live Strong, Fit, and Sexy - Until You're 80 and Beyond

Turn back your biological clock. A breakthrough book for men--as much fun to read as it is persuasive--Younger Next Year draws on the very latest science of aging to show how men 50 or older can become functionally younger every year for the next five to ten years, and continue to live like fifty-year-olds until well into their eighties. To enjoy life and be stronger, healthier, and more alert. To stave off 70% of the normal decay associated with aging (weakness, sore joints, apathy), and to eliminate over 50% of all illness and potential injuries. This is the real thing, a program that will work for anyone who decides to apply himself to "Harry's Rules."

Harry is Henry S. Lodge, M.D., a specialist in internal medicine and preventive healthcare. Chris Crowley is Harry's 70-year-old patient who's stronger today (and skiing better) than when he was 40. Together, in alternating chapters that are lively, sometimes outspoken, and always utterly convincing, they spell out Harry's Rules and the science behind them. The rules are deceptively simple: Exercise Six Days a Week. Eat What You Know You Should. Connect to Other People and Commit to Feeling Passionate About Something. The science, simplified and demystified, ranges from the molecular biology of growth and decay to how our bodies and minds evolved (and why they fare so poorly in our sedentary, all-feast no-famine culture). The result is nothing less than a paradigm shift in our view of aging.

Welcome to the next third of your life--train for it, and you'll have a ball.

Praise For Younger Next Year: Live Strong, Fit, and Sexy - Until You're 80 and Beyond…

“An extraordinary book . . . it is easy to read, the science is right, and if one follows Henry Lodge’s and Chris Crowley’s recommendations, both mental and physical aging can be delayed. I wish my patients would follow their advice.”
— K. Craig Kent, M.D., chief of vascular surgery, New York–Presbyterian Hospital

“Brain-rattling, irresistible, hilarious. If you’re up for it… [this book] could change your life.”
— The Washington Post

“One of our highest recommendations so far on growing old gracefully . . . Dr. Lodge, a prominent M.D., focuses on developments in cellular and evolutionary biology. Crowley, his guinea pig, is a firm believer in Dr. Lodge’s science and very good at convincing the reader that, if you’re a fifty-year-old man, you’d be an idiot not to start following the rules as soon as possible. . . . Should be read avidly by anyone growing older as well as forward-thinking youngsters.”
— Kirkus Reports


“An extraordinary book . . . it is easy to read, the science is right, and if one follows Henry Lodge’s and Chris Crowley’s recommendations, both mental and physical aging can be delayed. I wish my patients would follow their advice.”
— K. Craig Kent, M.D., chief of vascular surgery, New York–Presbyterian Hospital
— The New York Times

Chris Crowley, a former litigator (Davis Polk & Wardwell), is the coauthor, with Henry S. Lodge, of the Younger Next Year books, and the coauthor, with Jen Sacheck, PhD, of Thinner This Year. Though in his eighties, he fully lives the life, skiing black diamonds and routinely doing thirty-mile bike rides. He and his wife live in Connecticut and New York City.


Henry S. Lodge, MD, FACP, listed variously as “One of the Best Doctors in New York/America/the World,” headed a twenty-doctor practice in Manhattan and was the Robert Burch Family Professor of Medicine at Columbia University Medical Center.
Loading...
or support indie stores by buying on
(This book is on backorder)