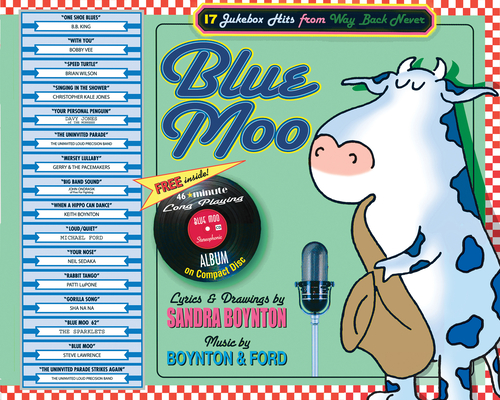 17 Jukebox Hits From Way Back Never

Put a nickel in the jukebox, assuming you can locate a jukebox, and that you remember what a nickel is. Here's legendary Beach Boy Brian Wilson singing lead and 10-part harmonies on "Speed Turtle." The incomparable Neil Sedaka crooning "Your Nose." B. B. King brings you a wistful "One Shoe Blues," Gerry and the Pacemakers offer "Mersey Lullaby," and Broadway great Patti LuPone sings—what else—the "Rabbit Tango." And then there's the hit single from Boynton's Your Personal Penguin sung by the impossibly cute Davy Jones of The Monkees. I mean jeepers, even Sha Na Na is here.

And OH! The book! Boynton has filled it with all things 50s and 60s. And, well, golly, it’s so happy and colorful and just terrific, Mister! Grab your saddle shoes, plunk two straws into that swell chocolate malt, and let's twist again like we did last century. 119,000 copies in print.

Sandra Boynton is a popular American cartoonist, children's author, songwriter, producer, and director. Since 1974, Boynton has written and illustrated over sixty children's books and seven general audience books, including five New York Times bestsellers. More than 70 million of her books have been sold, "mostly to friends and family," she says. She has also written (with Michael Ford) and produced six albums of renegade children's music. Three of her albums have been certified Gold (over 500,000 copies sold), and Philadelphia Chickens, nominated for a Grammy, has gone Platinum (over 1 million copies sold). Boynton has also directed twelve music videos of her songs, including the award-winning "One Shoe Blues" starring B.B. King, "Alligator Stroll" starring Josh Turner, and "Tyrannosaurus Funk" (animation) sung by Samuel L. Jackson. She lives in rural New England, and her studio is in a barn with perhaps the only hippopotamus weathervane in America.
Michael Ford, Sandra Boynton’s esteemed collaborator on Philadelphia Chickens and Rhinoceros Tap, is a classically trained composer and pianist, with a long detour in Progressive Rock performance. He and his family live down the road a spell from Sandy.