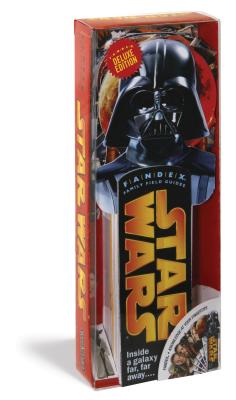 Aren't we lucky! Star Wars Fandex Deluxe is a perfect meeting of format and content, bringing all the virtues of Fandex to the supergalactic saga of our times, delivering an obsessive deck for the obsessive fan (and the perfect cheat sheet for parents who want to know what their kids are talking about). Darth Vader. Obi-Wan Kenobi. Luke Skywalker. Han Solo and Chewbacca, Emperor Palpatine, Padmé Amidala, Darth Sidious, Boba Fett, Qui-Gon Jinn, and, of course, Yoda, C-3PO, R2-D2, and Jabba the Hutt—in die-cut card after die-cut card, Star Wars Fandex Deluxe celebrates the pantheon of immortals from the Star Wars galaxy.

Star Wars Fandex Deluxe is authorized by and written in close collaboration with Lucasfilm. This deluxe title comprises 75 die-cut cards, 50 percent more than standard Fandex, and it includes not only the beloved characters, but also starships, droids, gadgets, and more. And the text is packed with fascinating information. Get to know the other Jedi Knights, like Plo Koon and Shaak Ti. The difference between a clone trooper and a stormtrooper. The architects of the Death Star. Plus the secret of Darth Vader’s paternal lineage, why there can be only two Sith Lords at any given time, and much more. It's the essential Fandex for every Star Wars buff.

Christopher Cerasi is a former Lucas Licensing editor who worked on many Star Wars titles, both as an editor and as an author. A lifelong Star Wars fan, he currently lives in Brooklyn, New York, with a Kaminoan named Terry.
Loading...
or
Not Currently Available for Direct Purchase