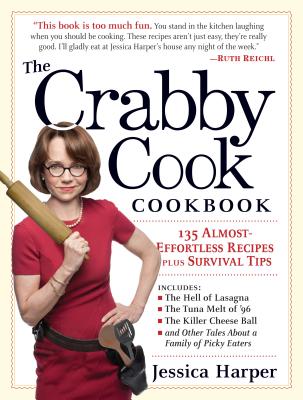 Introducing a very funny, slightly edgy, winning new kind of cookbook Jessica Harper—that Jessica Harper, star of Minority Report, Stardust Memories, Love and Death, Pennies from Heaven, and more—is a working mother of two who faces the same problems of every other woman who’s the designated home cook: How do you feed a family of picky eaters when you’re not crazy about being in the kitchen in the first place? A natural-born storyteller and terrifically engaging writer, she does what she’s done all her life—entertain us—while at the same time offering 100 not just easy but really easy-to-make, really tasty recipes.

Her stories are filled with charming crabbiness—of cooking early in the day for the two kids who eat only six things, then later for the husband who eats only about eight things, none of which share common ground with those first six; of inviting her mother-in-law for dinner and handing her an apron; of suffering HAS—Hostess Anxiety Syndrome—having the book club over and picking The Good Earth because it matches the neighborhood’s great new Chinese take-out, so no cooking involved! She wants to give a Nobel Prize to the person who invented bagged salad, and she recounts a wonderful story of making homemade turkey pot pie for the very first time—its crust tasted like rosemary-scented Play-Doh—to serve to Richard Gere and Cindy Crawford.

But crabby or not, she’s found a way to make it work, and work brilliantly. The Crabby Cook is about how to change your food-i-tude—no more garnish guilt, for example, and why “sort of homemade” is just as good as homemade (ie, knowing when to go all out with Pain-in-the-Ass Minestrone and when to settle for the almost-as-tasty Lazy-Ass Minestrone). It’s how to identify those Miracle Foods—the stuff that everyone loves, like Gobble-It-Up Turkey Chili and Tony’s Rigatoni. And even a whole survival guide—despite her HAS—to entertaining, including drinks, Whore’s

Jessica Harper is a movie actress (Pennies from Heaven, Stardust Memories, Minority Report, Love and Death, and others) and children’s book author. The mother of two college-age daughters, she lives with her husband in Los Angeles.