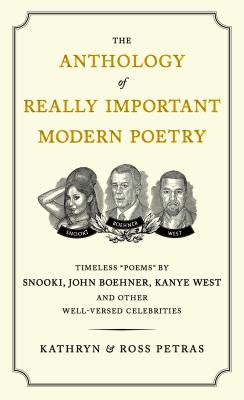 Required reading from great poets of our time. Drew Barrymore: “Upon Pondering Breasts.” Tom Cruise: “An Exegesis on Psychiatry.” Ann Coulter: “My Kind of Fun.” And Trump and Sheen and Snooki, John Boehner and Michelle Bachman, Miley and Ke$ha. Hugo Chavez. Even a Zen haiku by Emmitt Smith:

I think it’s his self-
confidence in himself that
makes him confident.

With their great gift for curating the inane public utterances of celebrities, politicians, and other self-important loudmouths, Kathryn and Ross Petras offer a timeless collection of “found” poetry—real quotes formatted as verse for hilarious and surprising effect. The quotes are inherently addictive and funny—but turning them into verse intensifies the effect, making the words even more ridiculous, parodies to revel in. And the Petrases take it one step further: organizing the poems by themes, introducing each work with a Norton Anthology mock seriousness, discussing “schools,” and larding the text with footnotes, The Anthology of Really Important Modern Poetry is pure deadpan pleasure. A whiff of Emily Dickinson in Ann Coulter? It’s literary treasure, right under our noses.

Kathryn and Ross Petras, sister and brother, are great curators of quotes whose calendar, The 365 Stupidest Things Ever Said, has sold over 4.6 million copies. Kathryn Petras lives in Seattle.

Ross and Kathryn Petras, brother and sister, are great curators of quotes whose calendar, The 365 Stupidest Things Ever Said, has sold over 4.6 million copies. Ross Petras lives in Toronto.