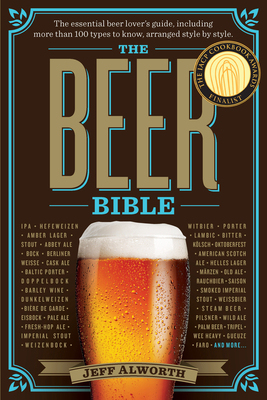 “The only book you need to understand the world’s most popular beverage. I swear on a stack of these, it’s a thumping good read.”––John Holl, editor of All About Beer Magazine and author of The American Craft Beer Cookbook

Imagine sitting in your favorite pub with a friend who happens to be a world-class expert on beer. That’s this book.

It covers the history: how we got from gruel-beer to black IPA in 10,000 years. The alchemy: malts, grains, and the miracle of hops. The variety: dozens of styles and hundreds of recommended brews (including suggestions based on your taste preferences), divided into four sections––Ales, Wheat Beers, Lagers, and Tart and Wild Ales––and all described in mouthwatering detail. The curiosity: how to read a Belgian label; the talk of two Budweisers; porter, the first superstyle; and what, exactly, a lager is. The pleasure. Because you don’t merely taste beer, you experience it.

“Covers a lot of ground, from beer styles and brewing methods to drinking culture past and present. There’s something for beer novices and beer geeks alike.”––Ken Grossman, founder, Sierra Nevada Brewing Co.

“Erudite, encyclopedic, and enormously entertaining aren’t words you normally associate with beer, but The Beer Bible is no ordinary beer book. As scinitillating, diverse, and refreshing as man’s oldest alcoholic beverage itself.”––Steve Raichlen, author of Project Smoke and How to Grill

Praise For The Beer Bible…

“… a box of treats… It’s a delight to find a book about beer that covers the subject in such breadth and depth at the same time as making it seem fresh and new again” – Pete Brown, All About Beer

“a tome worthy of its name” – Food+Wine.com

Jeff Alworth is a writer living in Portland, Oregon. He writes about beer, cider, and occasionally, politics. His books include: The Beer Bible (Workman), The Widmer Way (Ooligan), The Secrets of Master Brewers (Storey), and Cider Made Simple (Chronicle). His books have twice been cited by the North American Guild of Beer Writers as Best Book, and in 2016 The Beer Bible was named best wine, spirits, or beer book by the International Association of Culinary Professionals (IACP). He also co-hosts the Beervana Podcast, where he and Oregon State University economics professor Patrick Emerson discuss beer and the economics of beer. Jeff regularly gives educational speeches, guided tastings, and corporate presentations, and teaches courses about cider and beer.