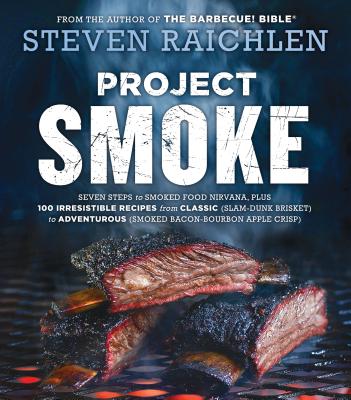 The Barbecue Bible for Smoking Meats

A complete, step-by-step guide to mastering the art and craft of smoking, plus 100 recipes—every one a game-changer –for smoked food that roars off your plate with flavor. Here’s how to choose the right smoker (or turn the grill you have into an effective smoking machine). Understand the different tools, fuels, and smoking woods. Master all the essential techniques: hot-smoking, cold-smoking, rotisserie-smoking, even smoking with tea and hay—try it with fresh mozzarella. USA Today says, “Where there’s smoke, there’s Steven Raichlen.” Steven Raichlen says, “Where there’s brisket, ribs, pork belly, salmon, turkey, even cocktails and dessert, there will be smoke.” And Aaron Franklin of Franklin Barbecue says, “Nothin’ but great techniques and recipes. I am especially excited about the smoked cheesecake.” Time to go forth and smoke.

“If your version of heaven has smoked meats waiting beyond the pearly gates, then PROJECT SMOKE is your bible.”
—Tom Colicchio

“Steven Raichlen really nails everything you need to know. Even I found new ground covered in this smart, accessible book.”
—Myron Dixon

Steven Raichlen is the author of the New York Times bestselling Barbecue! Bible® cookbook series, which includes the new Brisket Chronicles, Project Fire, Barbecue Sauces, Rubs, and Marinades; Project Smoke; The Barbecue Bible; and How to Grill. Winners of 5 James Beard awards and 3 IACP awards, his books have been translated into 17 languages. His TV shows include the public television series Steven Raichlen’s Project Fire (currently in its 2nds season), Project Smoke; Primal Grill; and Barbecue University; the French language series Le Maitre du Grill, and the Italian series Steven Raichlen Grills Italy.  Raichlen has written for the New York Times, Esquire, and all the food magazines; and is the founder and dean of Barbecue University. In 2015, he was inducted into the Barbecue Hall of Fame. His website is www.barbecuebible.com.

“Steven Raichlen really nails everything you need to know. As someone who has been smoking meat his whole life, even I found new ground covered in this smart, accessible book.”
--Myron Mixon, author and host of BBQ Pitmasters, Smoked, and BBQ Rules

“If your version of heaven has smoked meats waiting beyond the pearly gates, then Project Smoke is your bible.”
--Tom Colicchio, author, chef/owner Crafted hospitality, and host of Top Chef

“Nothin’ but great techniques and recipes. I am especially excited about the Smoked Cheesecake recipe.”
--Aaron Franklin, author and chef/owner Franklin Barbecue

“In his latest book, Project Smoke, Steven takes on the next frontier in the barbecue world, devoting his attention to the art of smoking….Project Smoke is both an indispensible guidebook to mastering smoking techniques and a cookbook billowing with innovative recipes, from the usual suspects like appetizers and meats to the more surprising desserts, cocktails, and condiments.”—Taste of the South

“The book is loaded with gorgeous, I-need-to-make-that-right now photos, but it’s also a super accessible soup-to-nuts primer on everything you need to know, and then some, whether you’re a novice, an enthusiast, or a total all-out smoked food addict. There’s hot smoking and cold-smoking, smoke-braising, tea-smoking, “caveman” smoking direct on embers, and stovetop smoking. Who wouldn’t want to know the 10 steps to perfect brisket, or how to make best-ever Chinese barbecued pork, smoked nachos, and bacon from scratch?”—Food & Wine online

“Project Smoke faithfully handles classics like smoked ribs, pork shoulder, and salmon, but also gleefully forays into unexpected categories like cheese, desserts, and cocktails. An excellent how-to for those fired up about smoke.”—Booklist

“Raichlen is the undisputed master of the grill; his 27 cookbooks include 10 devoted specifically to grilling. Of all his recipes that I have tried, I have never encountered one that failed to impress. And most were not just impressive, they were superb, worthy of serving to guests. It’s not just that he apparently understands every possible element of grilling and smoking, it’s that he also intuitively knows what kind of flavor combinations go best with grilled food.” —St. Louis Post-Dispatch