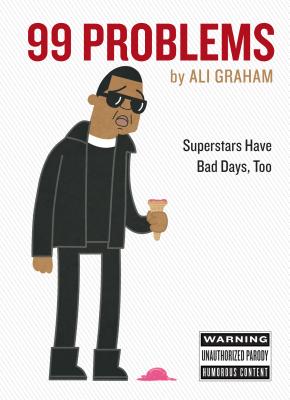 Superstars Have Bad Days, Too

Poor Superstar. All the money and fame in the world won’t prevent him from having a bad hair day. Or stepping in gum. Or not being able to fit into skinny jeans, or watching helplessly as a scoop of ice cream falls from its cone.

Or so an unnamed Superstar’s life is ingeniously imagined in this very funny book. Inspired by but not based on Jay Z’s monster hit “99 Problems,” illustrator Ali Graham riffs on what might be the real problems afflicting a world-famous music mogul who also happens to be married to the foremost diva of our time. Begun as a Tumblr, which went viral almost instantly, 99 Problems is a highly conceptual gift book showcasing 99 full-color illustrations of a cartoon character who looks just like a certain legendary rapper, and the often ordinary and sometimes fantastical things that happen to him. And that’s where the book finds its hilarious, compulsive hook—in an age that worships celebrity and assumes, somewhat enviously, that fame and fortune can protect one from life’s travails, what if that just weren’t true?

There’s a surprising, underlying warmth here. Even when the author dips into flights of pop culture fantasy—Superstar on the bow of the Titanic; Superstar whipping up a bad batch alongside Walter White from Breaking Bad—the recognition of shared kinship is strong. It’s a cartoon version of celebrity, but like the best cartoons, it’s edgy and knowing, yet sweet, too.

Ali Graham is an illustrator, filmmaker, and designer whose company, GrArG Media, provides visual marketing solutions for companies including Bobbi Brown, Estée Lauder, Michael Kors, Tommy Hilfiger, Pfizer, and others. He lives in Hastings in the UK and online at grarg.com.
Loading...
or
Not Currently Available for Direct Purchase