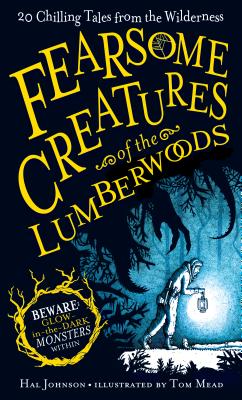 Fearsome Creatures of the Lumberwoods

20 Chilling Tales from the Wilderness

Just for kids, twenty bone-chilling tales about the most dangerous fantastical beasts in American folklore. Meet the Snoligoster, who feeds on the shadows of its victims. The Hodag, like a spiny-backed bull-horned rhinoceros. The Hoop Snake, which can chase prey at speeds of up to 60 miles per hour and then, with one sting of its tail, cause it to turn purple, swell up, and die.

Illustrated throughout, including eight drawings printed with glow-in-the-dark ink, Fearsome Creatures of the Lumberwoods is for every young reader who loves a good scare. The book was originally published in 1910 by William Thomas Cox and is now inspiringly retold by Hal Johnson, author of Immortal Lycanthropes. The creatures are all scales and claws, razor-sharp teeth and stealth, camouflage and single-minded nastiness. Straight out of the era of Paul Bunyan, they speak to an earlier time in American history, when the woods were indeed dark and deep and filled with mystery. The tone is smart and quirky. The illustrations have a sinewy, retro field-guide look. Read them around a campfire, if you dare.

Praise For Fearsome Creatures of the Lumberwoods: 20 Chilling Tales from the Wilderness…

“These are stories to be read late at night to an audience willing to be surprised, startled, and kept up wondering about what might lurk nearby.”
– Publishers Weekly, starred review
"Wildly imaginative and delightfully macabre."
—Booklist, starred review
“A folk treasure as well as required reading for hikers, trail bikers, and would-be cryptid hunters.”
– Kirkus, starred review

"A captivating collection for fans of Alvin Schwartz’s Scary Tales to Tell in the Dark, this is also ideal for those looking for something fresh, creative, and deliciously creepy. Outstanding faux-lore creature tales that will blow away middle school readers."
–  School Library Journal, starred review
"A darkly comic Poe-like bestiary."
--Chris Priestley, author of Uncle Montague’s Tales of Terror

Hal Johnson is the author of Immortal Lycanthropes, The Mad Tryst, and The Murder of Gonzago.

Tom Mead is a pen-and-ink artist who exhibits his work under the name "Mr. Mead."