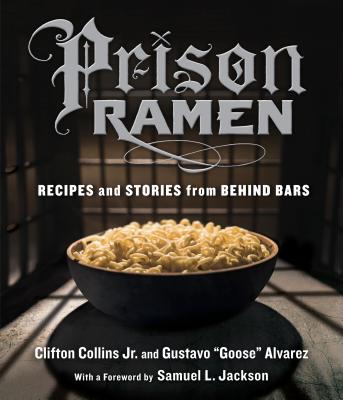 Recipes and Stories from Behind Bars

A unique and edgy cookbook, Prison Ramen takes readers behind bars with more than 65 ramen recipes and stories of prison life from the inmate/cooks who devised them, including celebrities like Slash from Guns n’ Roses and the actor Shia LaBeouf.

Instant ramen is a ubiquitous food, beloved by anyone looking for a cheap, tasty bite—including prisoners, who buy it at the commissary and use it as the building block for all sorts of meals. Think of this as a unique cookbook of ramen hacks. Here’s Ramen Goulash. Black Bean Ramen. Onion Tortilla Ramen Soup. The Jailhouse Hole Burrito. Orange Porkies—chili ramen plus white rice plus ½ bag of pork skins plus orange-flavored punch. Ramen Nuggets. Slash’s J-Walking Ramen (with scallions, Sriracha hot sauce, and minced pork).

Coauthors Gustavo “Goose” Alvarez and Clifton Collins Jr. are childhood friends—one an ex-con, now free and living in Mexico, and the other a highly successful Hollywood character actor who’s enlisted friends and celebrities to contribute their recipes and stories. Forget flowery writing about precious, organic ingredients—these stories are a first-person, firsthand look inside prison life, a scared-straight reality to complement the offbeat recipes.

Clifton Collins Jr. is an actor who’s appeared in Pacific Rim, Transcendence, Traffic, and other films, including the upcoming Triple Nine.

Samuel L. Jackson, who wrote the Foreword, is the award-winning actor who has appeared in more than 100 films, including Pulp Fiction and The Avengers.
Loading...
or support indie stores by buying on