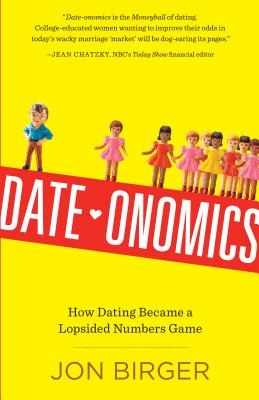 It’s not that he’s just not that into you—it’s that there aren’t enough of him. And the numbers prove it. Using a combination of demographics, statistics, game theory, and number-crunching, Date-onomics tells what every single, college-educated, heterosexual, looking-for-a-partner woman needs to know: The “man deficit” is real. It’s a fascinating, if sobering read, with two critical takeaways: One, it’s not you. Two, knowledge is power, so here’s what to do about it.

The shortage of college-educated men is not just a big-city phenomenon frustrating women in New York and L.A. Among young college grads, there are four eligible women for every three men nationwide. This unequal ratio explains not only why it’s so hard to find a date, but a host of social issues, from the college hookup culture to the reason Salt Lake City is becoming the breast implant capital of America. Then there’s the math that says that a woman’s good looks can keep men from approaching her—particularly if they feel the odds aren’t in their favor.

Fortunately, there are also solutions: what college to attend (any with strong sciences or math), where to hang out (in New York, try a fireman’s bar), where to live (Colorado, Seattle, “Man” Jose), and why never to shy away from giving an ultimatum.


Praise For Date-onomics: How Dating Became a Lopsided Numbers Game…

"Think Freakonomics and Moneyball if you run across Date-onomics, a by-the-numbers book on dating that argues advice-givers serving up tips for women on how to a find a man have it all wrong."
—Associated Press

“The author…provides fascinating evidence to show how and why dating and mating culture in America has changed in the 21st century.”
—Kirkus Review

"Birger offers a compelling argument backed by plentiful data... Recommended, especially for singles and those who advise them."
—Library Journal

“A fascinating look at romance and what’s going on with the mating rituals of homo sapiens today. This book will surprise and enlighten you.”
—AJ Jacobs, New York Times bestselling author of The Year of Living Biblically and Drop Dead Healthy

“Birger offers a compelling answer to the question, ‘Where are all the good guys?’ I would have said ‘Argentina.’ But now I’m thinking of heading to Aspen. Read Date-onomics and find out why.”
—Kristin Newman, author of What I Was Doing While You Were Breeding

“The modern single woman will share this book with her well-meaning friends and family who just can’t understand why she’s still single—it’s not her, it’s the date-onomics!”
—Melanie Notkin, author of Savvy Auntie and Otherhood

Jon Birger is a contributor to Fortune magazine. A former senior writer at Fortune and Money, he’s an award-winning freelance journalist who has written for Time, Barron’s, and Bloomberg BusinessWeek. He has appeared on MSNBC, CNN, CNBC, National Public Radio, and Fox News, sharing his expertise on topics ranging from the stock market to oil prices. A graduate of Brown University, Mr. Birger lives with his family in Larchmont, New York.
Loading...
or
Not Currently Available for Direct Purchase