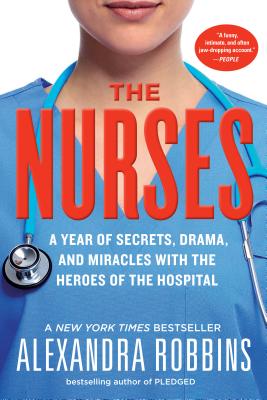 A Year of Secrets, Drama, and Miracles with the Heroes of the Hospital

A New York Times bestseller. “A funny, intimate, and often jaw-dropping account of life behind the scenes.”—People

In following four nurses, Alexandra Robbins creates sympathetic characters while diving deep into their world of controlled chaos. It’s a world of hazing—“nurses eat their young.” Sex—not exactly like on TV, but surprising just the same. Drug abuse—disproportionately a problem among the best and the brightest, and a constant temptation. And bullying—by peers, by patients, by hospital bureaucrats, and especially by doctors, an epidemic described as lurking in the “shadowy, dark corners of our profession.”

The result is a page-turning, shocking look at our health-care system.

Alexandra Robbins, winner of the prestigious 2014 John Bartlow Martin Award for Public Interest Magazine Journalism, is the author of four New York Times bestsellers, including Pledged and The Geeks Shall Inherit the Earth. She has written for The New Yorker, Vanity Fair, The New York Times, and other publications, and has appeared on numerous television shows from 60 Minutes to The Colbert Report.
Loading...
or support indie stores by buying on