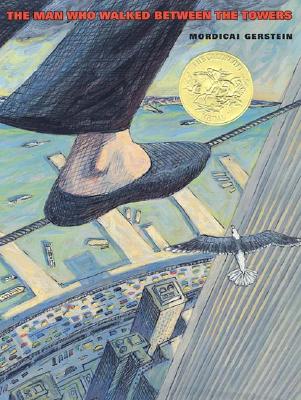 The Man Who Walked Between the Towers

In 1974, French aerialist Philippe Petit threw a tightrope between the two towers of the World Trade Center and spent an hour walking, dancing, and performing high-wire tricks a quarter mile in the sky. This picture book captures the poetry and magic of the event with a poetry of its own: lyrical words and lovely paintings that present the detail, daring, and--in two dramatic foldout spreads-- the vertiginous drama of Petit's feat.


Praise For The Man Who Walked Between the Towers…

"Gerstein's dramatic paintings include some perspectives bound to take any reader's breath away. Truly affecting."--Publishers Weekly (Starred Review) "Readers of all ages will return to this again and again for its history, adventure, humor, and breathtaking homage to extraordinary buildings and a remarkable man."--Kirkus Reviews (Starred Review) "With its graceful majesty and mythic overtones, this unique and uplifting book is at once a portrait of a larger-than-life individual and a memorial to the towers and the lives associated with them."--School Library Journal (Starred Review)

Mordicai Gerstein's recent books include the highly praised "What Charlie Heard." He lives in Northampton, Massachusetts.
Loading...
or
Not Currently Available for Direct Purchase