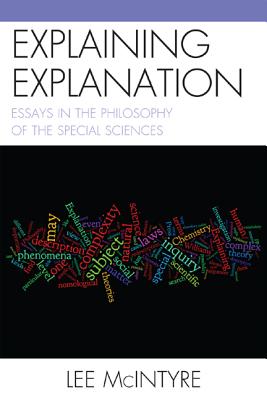 Essays in the Philosophy of the Special Sciences

Far from being inferior to physics, the special sciences are crucial to understanding what is distinctive about scientific explanation: that description is just as important as ontology and that having the right attitude toward empirical evidence is as necessary as having the right method. Explaining Explanation is a collection of Lee McIntyre's most significant philosophical essays from over the last twenty years. The principle areas of concern are the philosophy of social science and the philosophy of chemistry, but essays also cover more general problems such as underdetermination, explanatory exclusion, the accommodation-prediction debate, and laws in biological science. Despite the disparate themes of each essay-complexity, laws, explanation, prediction, reduction, supervenience, emergence, and redescription-they all converge through the lens of the special sciences, focusing on what it means to "explain" in the sciences.

Lee McIntyre is a research fellow at the Center for Philosophy and History of Science at Boston University and a lecturer in philosophy at Simmons College. He is the author of Laws and Explanation in the Social Sciences (Westview Press, 1996) and Dark Ages: The Case for a Science of Human Behavior (MIT Press, 2006).
Loading...
or support indie stores by buying on