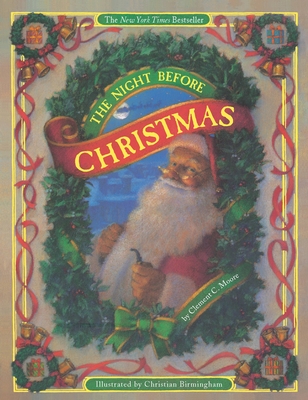 This bestselling beautifully illustrated edition of the classic Christmas poem about Santa Claus, sugarplums, and reindeer makes the perfect holiday gift for families.

Clement C. Moore's timeless Christmas Eve poem comes to life in this New York Times bestselling illustrated edition of The Night Before Christmas. With gorgeous illustrations by award-winning, renowned children's book illustrator Christian Birmingham, this gorgeous oversized picture book is sure to become a holiday classic for years to come.

Clement Clarke Moore, (1779-1863), was a professor at New York City's General Theological Seminary (built on land donated by his father) who, in an 1836 reprint of A Visit From St. Nicholas (more commonly known today as Twas the Night Before Christmas), was first credited as the author of the poem, and later included it in an anthology of his work.

Christian Birmingham is famous for his holiday titles, including A Christmas Carol and A Christmas Treasury. He has illustrated many other well-received books for young readers and has been short-listed several times for national awards for distinguished illustration. He lives and works in England.
Loading...
or support indie stores by buying on