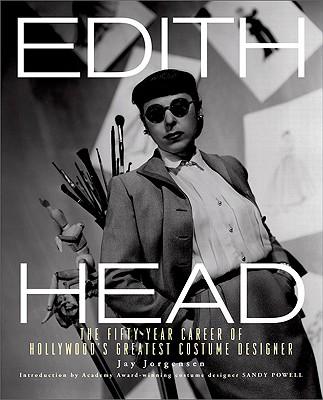 All About Eve. Funny Face. Sunset Blvd. Rear Window. Sabrina. A Place in the Sun. The Ten Commandments. Scores of iconic films of the last century had one thing in common: costume designer Edith Head (1897 -- 1981). She racked up an unprecedented 35 Oscar nods and 400 film credits over the course of a fifty-year career.

Never before has the account of Hollywood's most influential designer been so thoroughly revealed -- because never before have the Edith Head Archives of the Academy of Motion Picture Arts and Sciences been tapped. This unprecedented access allows this book to be a one-of-a-kind survey, bringing together a spectacular collection of rare and never-before-seen sketches, costume test shots, behind-the- scenes photos, and ephemera.

Jay Jorgensen is a film and fashion historian and collector. He is the author of Edith Head: The Fifty-Year Career of Hollywood's Greatest Costume Designer. Jorgensen is also a photographer whose work has been showcased in magazines such as People and TV Guide. He lives in Palm Springs, California.

Verdict For fans of classic Hollywood movies and students of fashion, photography, and film. Those who want a more in-depth look at the personal life of this iconic Hollywood figure should read David Chierichetti's Edith Head: The Life and Times of Hollywood's Celebrated Costume Designer.


The Independent (UK), 10/4/10
"There’s fierce, and there’s Edith Head. The name to drop in the golden age of Hollywood, Head was wardrobe consultant on Rear Window and All About Eve, to name a couple of classics.
This stunning new book chronicles her 50-year career with sketches and archive material."


Films in Review
“The book is a treat. A spectacular repository of on-set pictures of Ms. Head at work, plus her costume designs, and even a recipe for Chicken and Potatoes Casa Ladera (her home in the 50s), we get a full-bodied picture of her career . . . . fun . . . beautiful.”
Sight & Sound
“This spectacular one-of-a-kind book surveys Head’s work in words and pictures, bringing together rare, never-before-seen sketches, fabric samples, costume tests and behind-the-scenes photos from the Edith Head archives.”
Guardian
“[Author Jay Jorgensen’s] pictures are a revelation. He has excellent images of Head's designs, at their best when based on character rather than dazzle.”
Rage Monthly
“Edith Head: The Fifty-Year Career of Hollywood’s Greatest Costume Designer is a beautifully done book. The flow of the chapters, the extensive photos comprised of stars and the costumes alone are quite remarkable and create a fascinating read for Hollywood fashion aficionados.”
or
Not Currently Available for Direct Purchase
Copyright © 2020 American Booksellers Association