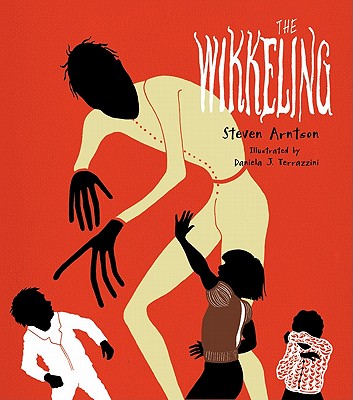 In the enormous city of the Addition, all children are SAFE, SECURE, and SUPERVISED, and are watched by cameras even while they sleep. Henrietta is unlikable at her competitive school until she meets Gary and Rose. They all share something in common: headaches with an unknown cause. Then, late one night, Henrietta makes a startling discovery when she finds a wounded cat in the attic above her bedroom. Soon after, a series of strange occurrences follow, including the appearance of a threatening creature with long, waxy fingers, who calls itself the Wikkeling. With the help of an ancient Bestiary, will Henrietta and her friends solve these mysteries before the Wikkeling finally catches them? Age: Middle Reader 8-12

“A truly original piece of work. Swinging from funny to creepy to intriguing, it kept me enthralled throughout. I loved it.”

“The Wikkeling is fresh and edgy. Even when I wasn’t reading the book, I couldn’t stop thinking about it. It is a great story that makes the reader ponder, “What if?” and, “Could our future look similar to the one in this book?” The Wikkeling is a middle-grade novel with the maturity to appeal to adult science fiction readers as well.  It is a good read.” Jacqueline West, New York Times bestselling author of The Shadows (Book 1 of The Books of Elsewhere)

“Skillfully written, clever, frightening, and hopeful, it is a tale that feels like a reassuring secret handshake to anyone who believes in the power of books.” Kirkus Reviews, April 15, 2011
Provocative and offbeat. (Fantasy. 10-14) School Library Journal
"Arntson has created a detailed and fascinating dystopian world that seems eerily similar to our own, and Terrazzini’s illustrations strike just the right note. This delightfully creepy tale will appeal to fans of Neil Gaiman’s Coraline."

Kirkus, May 2011
"The 13 stories, from a range of authors including several who have previously written mostly for adults, range from romance to horror, cover a gamut of times and places …machinery and punk spirit."

Books at Midnight, May 2011
"short yet pleasurable, like whiffs of a delicious, passing aroma.”

The Book Smuggler, 5/27/11
"The Wikkeling is an interesting endeavor, mixing a horrific sort of Coraline-ish fantasy element with a dystopian, high-technology society. … wonderfully creepy and brilliantly imagined."

Ian Chipman, Booklist May 2011
"…What Arntson is really doing is looking forward to look back, using a near-future technoland to counterpoint the joys of old books over cell phones, trees over highways, and creatures just at the periphery of understanding over mollycoddled safety. It’s all kind of creepy (especially with Terrazzini’s silhouette artwork), deadpan funny, and totally engrossing, even though the book doesn’t come close to fully explaining everything. But that is ultimately a smart move; asking for a bit of interpretation makes this challenging and at times even confounding read that much more memorable. Although too many books are burdened with unnecessary sequels, this one screams for one, or even many." genderequalbooks.com, 7/10/11
“This engaging, slightly spooky fantasy novel can be read on a couple of levels. Upper elementary kids (the target age is 9-12 years old) will likely read it as an adventure story….Adults and older readers might get into the allegorical aspect of the story.”

Deseret News, 8/21/11
"The Wikkeling” is a combination of fairy tale elements (monsters, secret attic rooms, hidden passages and turrets in castles) juxtaposed against modern media-driven technology (lilac smelling exhaust, commercials emitted in cars and computers counting down to their own obsolescence)… Arntson’s balance of past, present and dystopian future is skillfully handled… Terrazzini’s eerie black and white shadow drawings and the detailed pages from the handwritten Bestiary add to the antiquated feel of the Old World of books.”

King County Library System, Book Talk blog
"First time author Steve Arnston creates an intriguing and truly creepy dystopian novel for the middle grade set.  There is no evil source at play here- just a version of reality where technology combined with fear and the drive for efficiency has taken over. His vision of the future is tied enough to current realities, both in technology and educational testing, that it is not a huge leap for readers to buy in.   The characters are well-developed down to the last detail. From the teacher concerned with the class's statistics to  Rose's secretly squatting family who runs their own underground library servicing the mysterious and dilapidated Old City, each character serves to provide a little more insight into the world Arnston creates and a backdrop to the children's adventure.  Finally, the real kicker- excellent writing.  Arnston delivers this dystopian adventure with sharp writing and even sharper humor.  Literary, creepy, well-developed and hilarious, this is a great handsell." Sarah Biggerstaff, Program Specialist Youth Services, George W. Hawkes Central Library
"For any child who enjoys a good spine tingling suspense novel, The Wikkeling by Steven Arntson will grab hold and never let go."

The Memorial Hall Library
“The Wikkeling is a fascinating and unusual novel for older readers…The author warns the reader that not (all of these) problems will be solved during the story: “She will not become beautiful when someone gives her a new hairstyle.  She will not find a miracle cure for her pimples when an angel sees she’s a good girl inside.  She will not find out that she’s actually a princess, and she won’t become happily forever when a prince marries her.  Those books are out there, and your school librarian can help you find one.  This isn’t it.” … Parents will also enjoy some of the ironic humor in this story.”

Teacherdadbooks.blog
“A little spooky, a bit complicated, and very much well worth it… 4/5 stars, highly recommend it.”

Kansas City Public Library, reviewed by Ron Freeman“Wonderful… Arntson’s vision is scary and believable…, a compelling story… I would recommend this book to kids ages 11 and up who like dark visions of the future.” alibi.com
“The Wikkeling is empowering for anyone who has ever been, or ever will be, a kid in middle school. It’s also a fantastic read.”

Steven Arntson lives in Seattle. He earned an MFA in fiction from the Iowa Writers' Workshop, and currently divides his time between writing stories, composing and performing music, and teaching music and writing to high school and college students. He lives with his wife in an attic apartment in an old house with three cats and many bicycles. This is his first book for children.
Loading...
or
Not Currently Available for Direct Purchase