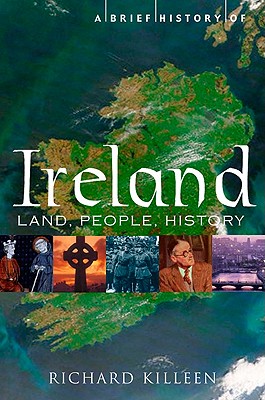 A Brief History of Ireland

The perfect introduction to the Irish story-a story wrapped in mythology and legend.

Since its very origins, Ireland has become the home for a successive series of invaders-the Celts, Christians, Vikings, and Normans. And despite deprivation, desperation, and suppression, Ireland has developed an unwavering sense of purpose and place.

In this lucid and fascinating introduction to the island's story, Richard Killeen separates the history from the myths. Ranging from Ireland's pre-Gaelic origins to the present day, it emphasizes the island's uniqueness as well as it close ties to English and European culture. The tangled and often violent relationship between Ireland and the English crown is a key part of the story, as are nationalism, religious allegiances, and the island's internal conflicts.

Killeen locates Ireland in a European and Atlantic world and explores the nation's remarkable contribution internationally: through its literature, its diaspora, and its genius for popular politics.

Richard Killeen is a historian and the editorial director of an Irish publishing company. He has written a number of books on Ireland's past including A Short History of the 1916 Rising and The Concise History of Modern Ireland.
Loading...
or support indie stores by buying on