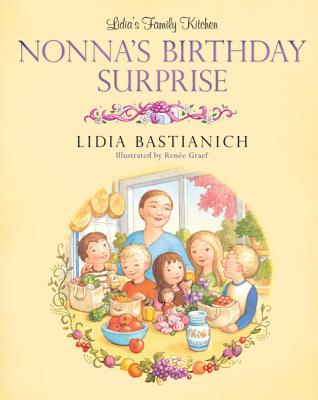 It's Nonna Mima's birthday, and Nonna Lidia and her grandkids are determined to throw her a surprise feast! While planning the evening's menu, Nonna Lidia shares her memories of growing up on the farm during each season of the year, gardening her own fruits and vegetables, and being surrounded by animals of all kinds. After a trip to the farmers' market, Lidia and the kids prepare a pasta primavera, perfect for a family celebration!

RenÃ©Graef's warm, heartfelt illustrations capture Lidia Bastianich's love for her family and the food that they share. Included are eighteen recipes that emphasize the ingredients abundant during each season and the use of leftover ingredients, while "Kids Can" suggestions note ways that kids can participate in the making of the meals.

Whether you are looking for an intergenerational family story or are a fan of America's favorite Italian chef, Nonna's Birthday Surprise delivers a savory treat.

"As warm and homey as a Sicilian country kitchen, this latest foray . . . should appeal across generations."—The New York Times

"[Lidia's] exhortations about seasonal, fresh and healthful eating and her celebration of the sensuous joys of touching, tasting and experiencing food are evocative and winning. The 18 recipes at the back are excellent.'—Kirkus Reviews

"It's a recipe of roles that makes for a delightful little story."—Chicago Tribune

Lidia Bastianich first learned how to cook in Italy when she was a little girl. She now owns four restaurants in New York City, one in Pittsburgh, and one in Kansas City. She has three television shows on PBS, including Lidia's Italy, and is the author of numerous bestselling cookbooks and the children's book, Nonna Tell Me a Story: Lidia's Christmas Kitchen. In addition, Lidia has her own line of pasta sauces, a winery in Italy, and loves to cook with her five grandchildren. She lives in Long Island, NY. You can visit her online at lidiasitaly.com and via Twitter @LidiaBastianich.

RenÃ©Graef has illustrated over seventy books for children, including the Kirsten series in the American Girl collection and many of the My First Little House books by Laura Ingalls Wilder. She has also illustrated classics such as The Nutcracker and My Favorite Things, as well as books on American icons Mount Rushmore and Paul Bunyan. She lives in Cedarburg, Wisconsin, with her family, and you can visit her online at graefillustration.com.
Loading...
or
Not Currently Available for Direct Purchase