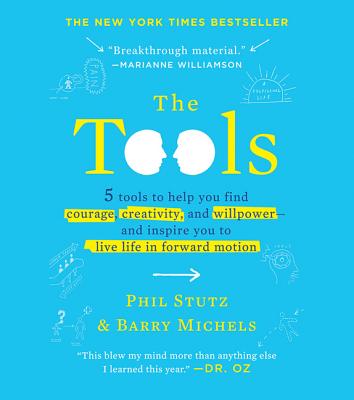 5 Tools to Help You Find Courage, Creativity, and Willpower--and Inspire You to Live Life in Forward Motion (RP Minis)

The Tools is a groundbreaking book about personal growth that presents a uniquely effective set of five tools that will help to change your life to one that is consumed with happiness and fulfillment.
In this abridgment of their bestselling book, Phil Stutz and Barry Michels show readers how to use the right tools to help control their actions and behavior so that they can change for the better. They encourage readers to go beyond thinking and actually start "doing." Their transformative techniques will teach you how to get unstuck, control anger, express yourself, defeat anxiety, and much more.
NOTE: Product measures 2.5 x 3 inches

Phil Stutz graduated from City College in New York and received his MD from New York University. He worked as a prison psychiatrist on Rikers Island and then in private practice in New York before moving his practice to Los Angeles in 1982.

Barry Michels has a BA from Harvard, a law degree from University of California, Berkeley, and an MSW from the University of Southern California. He has been in private practice as a psychotherapist in Los Angeles since 1986.
or
Not Currently Available for Direct Purchase
Copyright © 2020 American Booksellers Association