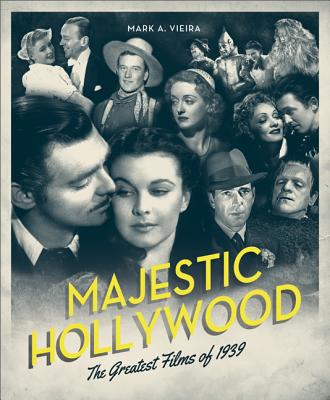 1939 was a watershed year. The Great Depression was barely over; economics, politics, and culture braced for war. There was a lull before the storm and Hollywood, as if expecting to be judged by posterity, produced a portfolio of masterpieces. No year before or since has yielded so many beloved works of cinematic art: The Hunchback of Notre Dame, Gunga Din, Only Angels Have Wings, Destry Rides Again, Beau Geste, Wuthering Heights, The Wizard of Oz, Stagecoach, Ninotchka, Goodbye, Mr. Chips, Dark Victory, Mr. Smith Goes to Washington, The Women, and of course, Gone With the Wind.

This world of entertainment is illustrated by rarely seen images. Made during the most glamorous era in movie history, whether scene stills, behind-the-scenes candids, portraits, or poster art, the photos are as distinctive, evocative, and powerful as the films they were meant to publicize. Presenting the best of these images and the stories behind them, this book is a cavalcade of unforgettable films from 1939: Hollywood's Greatest Year.

Praise For Majestic Hollywood: The Greatest Films of 1939…

Mark A. Vieira is a photographer and author who specializes in Hollywood history. He has lectured at USC, UCLA, Lincoln Center, Universal Studios, and the Hollywood Heritage Museum. Vieira has appeared in documentaries such as TCM's Moguls and Movie Stars and Complicated Women. He is also the author of George Hurrell's Hollywood, Cecil B. DeMille, and Into the Dark, among other film-related titles. Vieira resides in Los Angeles.
Loading...
or
Not Currently Available for Direct Purchase