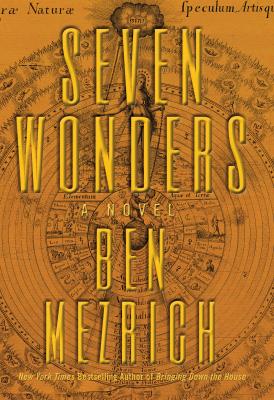 When the reclusive mathematician Jeremy Grady is murdered, it's up to his estranged brother Jack to find out why. Jack's search leads him on a far-flung journey -- from Brazil, India, Peru, and beyond -- as he unravels the mystery that links the Seven Wonders of the World, and discovers that Jeremy may have hit upon something that's been concealed for centuries. With the help of scientist Sloane Costa, they discover a conspiracy to hide a roadmap to the Garden of Eden -- and the truth behind a mythological ancient culture.

With a heart-pounding pace and panoramic backdrops, Seven Wonders is an electrifying read, and will be the first in a trilogy.

"Mezrich has written a rollicking adventure with a fantastic behind-the-scenes tour of some of the world's most intriguing spots."
--Publishers Weekly

"It's a fast-moving thriller involving murder, conspiracy, historical mystery, and the Seven Wonders of the World.
Is it enjoyable and imaginative? Hell, yeah."
--Booklist

This novel is grounded in a thorough knowledge of classical literature, with skillful interweaving of plausible archaeological speculation, ancient mythology, and exciting modern adventure. VERDICT ¬Readers who enjoy artifact-seeking books with behind-the-scenes tours of real-life sites will be delighted. [Ratner is set to adapt a film version.—Ed.]
--Library Journal

"Seven Wonders delivers a page-turning global adventure with the high stakes and hard-charging characters we expect from a Ben Mezrich story. An exciting, compulsive read that will please thriller fans and history buffs."
--Matthew Pearl, New York Times bestselling author of The Dante Club and The Technologists

"Ben Mezrich's Seven Wonders is a terrific adventure, a wild quest around the world in the best Da Vinci Code tradition, in the company of an Indiana Jones-style scientist-hero who doesn't know the meaning of fear."
--Joseph Finder, author of Paranoia and Suspicion

Ben Mezrich is the New York Times beselling author of Bringing Down the House and The Accidental Billionaires, both of which were made into major motion pictures (as 21 and The Social Network). He lives in Boston.
Loading...
or
Not Currently Available for Direct Purchase