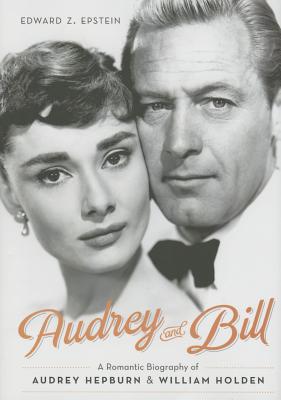 A Romantic Biography of Audrey Hepburn and William Holden

Here for the first time is the complete, captivating story of an on-set romance that turned into a lifelong love story between silver screen legends Audrey Hepburn and William Holden. In 1954, Hepburn and Holden were America's sweethearts. Both won Oscars that year and together they filmed Sabrina, a now-iconic film that continues to inspire the worlds of film and fashion.

Audrey & Bill tells the stories of both stars, from before they met to their electrifying first encounter when they began making Sabrina. The love affair that sparked on-set was relatively short-lived, but was a turning point in the lives of both stars. Audrey & Bill follows both Hepburn and Holden as their lives crisscrossed through to the end, providing an inside look at the Hollywood of the 1950s, '60s, and beyond. Through in-depth research and interviews with former friends, co-stars, and studio workers, Audrey & Bill author Edward Z. Epstein sheds new light on the stars and the fascinating times in which they lived.

Praise For Audrey and Bill: A Romantic Biography of Audrey Hepburn and William Holden…

"Epstein gets to the heart of the human side of both of them...It's a beautifully written love story and dual biography."
—Bill Biss, Rage Monthly

“It had to happen. The romance revealed. And Edward Z. Epstein is up to the task in Audrey and Bill…Easy to read, with never-ending details. As if we are there in the lovers' arms.”
—George Christy, Beverly Hills Courier

"I started to read the few opening pages and couldn't stop...this book was written so differently. It really showed the people underneath the layer of the Hollywood lights that scrutinized them for much of their lives...it's almost three biographies in one book --Audrey Hepburn, Bill Holden and the behind the scenes look at Hollywood... The writing is wonderful, the people come to life off the pages..."
—Chick with Books blog

Edward Z. Epstein is a long-time show business insider, having worked for years as the New York press contact for MCA/Universal. He has written many books, on subjects including Mia Farrow, Rita Hayworth, Lana Turner, Marlon Brando, and Lucille Ball. Ava, his play about Ava Gardner, has been optioned by producer David Brown, and is en route to production. Epstein lives in New York City.
Loading...
or
Not Currently Available for Direct Purchase