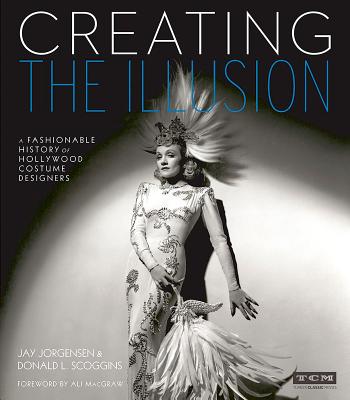 Marilyn Monroe made history by standing over a subway grating in a white pleated halter dress designed by William Travilla. Hubert de Givenchy immortalized the Little Black Dress with a single opening scene in Breakfast at Tiffany's. A red nylon jacket signaled to audiences that James Dean was a Rebel Without a Cause. For more than a century, costume designers have left indelible impressions on moviegoers' minds. Yet until now, so little has been known about the designers themselves and their work to complement and enrich stories through fashion.

Creating the Illusion presents the history of fashion on film, showcasing not only classic moments from film favorites, but a host of untold stories about the creative talent working behind the scenes to dress the stars from the silent era to the present day. Among the book's sixty-five designer profiles are Clare West, Howard Greer, Adrian, Walter Plunkett, Travis Banton, Irene, Edith Head, Cecil Beaton, Bob Mackie, and Colleen Atwood. The designers' stories are set against the backdrop of Hollywood: how they collaborated with great movie stars and filmmakers; how they maneuvered within the studio system; and how they came to design clothing that remains iconic decades after its first appearance. The array of films discussed and showcased through photos spans more than one hundred years, from draping Rudolph Valentino in exotic "sheik" dress to the legendary costuming of Gone with the Wind, Alfred Hitchcock thrillers, Bonnie and Clyde, Reservoir Dogs, and beyond.

About TCM:
Turner Classic Movies is the definitive resource for the greatest movies of all time. It engages, entertains, and enlightens to show how the entire spectrum of classic movies, movie history, and movie-making touches us all and influences how we think and live today.

Jay Jorgensen is a film and fashion historian and collector. He is the author of Edith Head: The Fifty-Year Career of Hollywood's Greatest Costume Designer. Jorgensen is also a photographer whose work has been showcased in magazines such as People and TV Guide. He lives in Palm Springs, California.

“The behind-the-seams artistry of Hollywood costumers is ready for its close-up in this opulent coffee-table book.”
--O Magazine

“One of the most stunning coffee table books to have come around in years (and coming from a coffee table book collector, that's saying a lot) so I would definitely recommend it to both classic and modern film fans or perhaps even to people who dig costume and fashion design.”
–Stardust