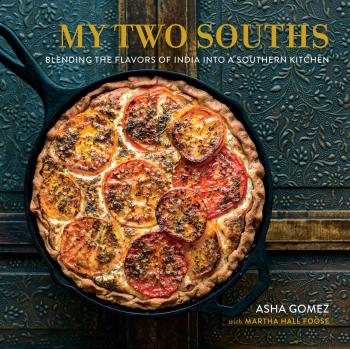 Blending the Flavors of India into a Southern Kitchen

~i~>
From award-winning chef and restaurateur Asha Gomez comes this collection of recipes that fuse together the "Two Souths" that are near and dear to her heart: the beloved cuisine of Southern India, and the downhome tastes of the American South.
My Two Souths takes you on a culinary journey with Chef Asha Gomez, from her small village in the Kerala region of southern India to her celebrated restaurants in Atlanta, and on into your kitchen. Her singular recipes are rooted in her love of Deep-South cooking, as well as the Southern Indian flavors of her childhood home. Recipes include:

Praise For My Two Souths: Blending the Flavors of India into a Southern Kitchen…

"Certainly worthy of all the buzz... I love taking something familiar and switching it up and creating a dish that is new and exciting... a must have."
-EatYourBooks.com blog

"Asha Gomez bridges the gulf between the two regions' food cultures with ease, all the while pushing the border-blurring recipes way beyond fusion-a kind of F word to many in the food world...But credit to the authors for simplifying, explaining, and telling you how to make dinner in one page or less."
-Tastebook.com blog

"It is her command of the Indian spice box that emboldens her to kick up the heat in ways that Emeril never will. Hers is Southern cooking, through and through."—-The New York Times

"The author's sure hand and Kerala roots make for a stunning fusion of culinary traditions."—-The Washington Post

"Food that remaps the geography of home and heart."—-Atlanta Journal Constitution

"Gomez is all about storytelling: Diners at Spice to Table get the histories behind the dishes...That same depth of history and personal connection appears on the pages of My Two Souths."—-Eater.com

"It's Asha's real life that makes the food in her book so pleasant. It's food that hugs you back."—-Food52

"A South Indian cook moves to the American South and deliciousness ensues."—-thekitchn.com

"Blends her two culinary worlds of India and Southern food with delicious results."—-Shelf Awareness for Readers

Asha Gomez is the author of the award-winning cookbook My Two Souths: Blending the Flavors of India into a Southern Kitchen, and runs The Third Space, an Atlanta culinary studio where she hosts her streaming cooking classes and YouTube channel Curry and Cornbread. Asha also works as a Global Ambassador for CARE specifically in the area of food insecurity. She's also involved with the James Beard's Foundation's Chef Boot Camp for Policy Change.

Martha Hall Foose is the author of Screen Doors & Sweet Tea: Recipes and Tales of a Southern Cook, the bestselling homage to Southern cooking that won both the James Beard Award for American Cooking and the Southern Independent Booksellers Award. Her other titles include A Southern Course and A Good Meal is Hard to Find: Storied Recipes from the Deep South. She lives in Oxford, Mississippi.
Loading...
or
Not Currently Available for Direct Purchase