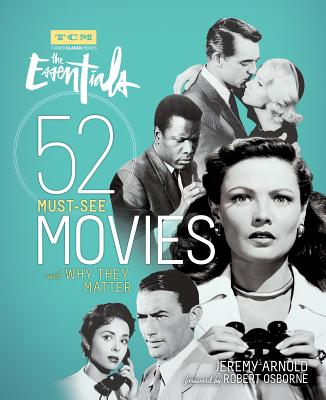 52 Must-See Movies and Why They Matter (Turner Classic Movies)

Showcasing 52 Essential films from the silent era through the 1980s, Turner Classic Movies invites you into a world filled with stirring performances, dazzling musical numbers, and bold directorial visions that mark the greatest moments in film history.
Since its inception on Turner Classic Movies in 2001, The Essentials has become the ultimate series for movie lovers to expand their knowledge of must-see cinema and discover or revisit landmark films that have had a lasting impact on audiences everywhere.
Based on the TCM series, The Essentials book showcases fifty-two must-see movies from the silent era through the early 1980s. Readers can enjoy one film per week, for a year of stellar viewing, or indulge in their own classic movie festival. Some long-championed classics appear within these pages; other selections may surprise you. Each film is profiled with insightful notes on why it's an Essential, a guide to must-see moments, and running commentary from TCM's Robert Osborne and Essentials guest hosts past and present, including Sally Field, Drew Barrymore, Alec Baldwin, Rose McGowan, Carrie Fisher, Molly Haskell, Peter Bogdanovich, Sydney Pollack, and Rob Reiner.
Featuring full-color and black-and-white photography of the greatest stars in movie history, The Essentials is your curated guide to fifty-two films that define the meaning of the word "classic."

Jeremy Arnold is a writer and film historian who has written more than 500 programming articles for TCM.com and has contributed to Moviemaker, Variety, Premiere, and DGA magazines. He has recorded audio commentaries for the DVD releases of several classic films and is the author of Lawrence of Arabia: The Fiftieth Anniversary, a coffee-table book companion to that film's Blu-ray release. Jeremy resides in Los Angeles.

Praise For The Essentials: 52 Must-See Movies and Why They Matter (Turner Classic Movies)…

"[An] excellent book. Author Arnold distills why each movie is a must-see, and augments his knowledgeable text with sidebar quotes from various TCM hosts... Handsomely designed and packed with great photos, The Essentials would be a perfect gift for a young person who's just dipping his or her toe into these waters…but I found it equally appealing."
—Leonard Maltin, leonardmaltin.com