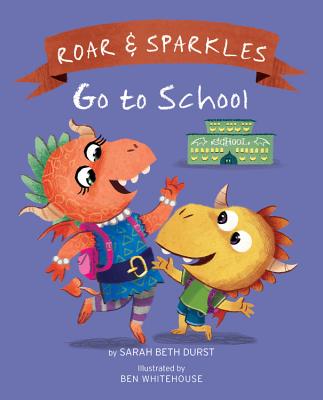 Roar and Sparkles Go to School

The first day of school can be scary but Roar and Sparkles the dragons will help kids get over their fears of a new experience.

Roar is worried about his first day at school. He's worried that he'll have to do really hard things, like molt his scales and fly over a volcano. And what if his teacher doesn't like dragons?

Big sister Sparkles reassures Roar That school is fun. And when the first day of school arrives, Roar finds his worries melt away.
He meets new friends, plays dragon games, listens to fun stories, and finds a way to thank his sister for support.

Roar and Sparkles Go to School is a sweet story about the anxieties children may feel about attending school for the first time, as well as a comforting tale about the bond between siblings. Sarah Beth Durst's imaginative and playful script is enhanced by Ben Whitehouse's modern and fresh illustrations to create a book that's sure to squelch first-day-of-school worries for children.

Praise For Roar and Sparkles Go to School…

"In appealing illustrations that have a bright, crayony roughness, Whitehouse has fun bringing Durst's world to life... the lively details of Roar's daily life might be just enough to let readers temporarily forget about their own back-to-school nervousness."—-Publishers Weekly

"Readers will enjoy the peek at dragon life that Whitehouse provides, from the way Roar's mom roasts the veggies before they come out of the garden to the pesky winged ponies that must be chased off the roof."

Sarah Beth Durst is the author of nine fantasy novels for children, teens, and adults. She was awarded the 2013 Mythopoeic Fantasy Award for Children's Literature and has been a finalist for SFWA's Andre Norton Award.

Ben Whitehouse is an illustrator born and raised in Birmingham UK. He recently lived in Vienna, Austria for a year, but is now back in the UK and based in Bourne, Lincolnshire, where he lives with his lovely girlfriend, Yvonne, and their crazy border collie named Sparrow. Ben has previously worked in the animation industry as a character designer, animator, and stop motion puppet maker before finding his feet within the world of illustration.
Loading...
or
Not Currently Available for Direct Purchase