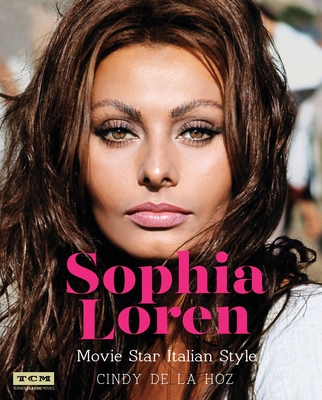 The first book on Sophia of its kind, Sophia Loren: Movie Star Italian Style is a photographic tribute to the beloved icon, recounting the star's extraordinary life and notable films.

From the humblest of beginnings in her native Italy, Sophia Loren has gone on to have one of the most interesting paths in motion picture history. In a career spanning close to seven decades, she starred in epic blockbusters of the '50s, '60s, and '70s; dazzled in dramatic roles opposite the likes of Cary Grant, Marcello Mastroianni, John Wayne, Gregory Peck, and Marlon Brando; and turned heads in classics like Houseboat, Marriage Italian Style, Grumpy Old Men, and Two Women, for which she was awarded the first Academy Award for Best Actress in a leading role given to the star of a foreign film.

Sophia Loren is a photographic tribute to the beloved icon, taking you on an illustrative journey through her remarkable life, dearest relationships, and diverse film canon. Filled with hundreds of rare color and black-and-white photographs and featuring quotes by Sophia and those who have known her best, it's a volume as stunning as its ageless subject.

"...packed with hundreds of rare colour and black-and-white photographs, which makes it a delicious page-turner and window on the golden age of cinema. For anyone who has an interest in film history, this book is definitely one to add to your shelves."—- ITALIA! Magazine

Cindy De La Hoz is the author of several books on film and fashion -- among them, Audrey and Givenchy, Lucy at the Movies, and Lana: The Memories, the Myths, the Movies, which Leonard Maltin called "one of the best books about a star I've ever read." She has also edited numerous books on film history and women's lifestyle subjects. Cindy lives in Philadelphia, PA.Turner Classic Movies is the definitive resource for the greatest movies of all time. We entertain and enlighten to show how the entire spectrum of classic movies, movie history, and movie-making touches us all and influences how we think and live today.
Loading...
or
Not Currently Available for Direct Purchase