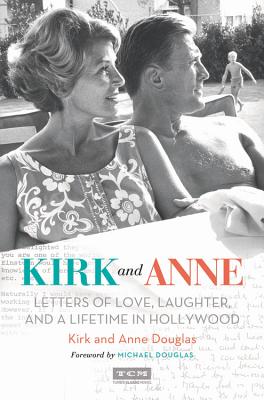 Letters of Love, Laughter, and a Lifetime in Hollywood (Turner Classic Movies)

Film legend Kirk Douglas and Anne Buydens, his wife of nearly sixty-three years, look back on a lifetime filled with drama both on and off the screen. Sharing priceless correspondence with each other as well as the celebrities and world leaders they called friends, Kirk and Anne is a candid portrayal of the pleasures and pitfalls of a Hollywood life lived in the public eye. Compiled from Anne's private archive of letters and photographs, this is an intimate glimpse into the Douglases' courtship and marriage set against the backdrop of Kirk's screen triumphs, including The Vikings, Lust For Life, Paths of Glory, and Spartacus. The letters themselves, as well as Kirk and Anne's vivid descriptions of their experiences, reveal remarkable insight and anecdotes about the legendary figures they knew so well, including Lauren Bacall, Frank Sinatra, Burt Lancaster, Elizabeth Taylor, John Wayne, the Kennedys, and the Reagans. Filled with photos from film sets, private moments, and public events, Kirk and Anne details the adventurous, oftentimes comic, and poignant reality behind the glamour of a Hollywood life-as only a couple of sixty-two years (and counting) could tell it.

Kirk Douglas, a living legend at age 100, has distinguished himself as an actor, producer, philanthropist, and author. His numerous recognitions for achievements both on and off screen include an Academy Award for Lifetime Achievement, the Presidential Medal of Freedom, and France's Legion of Honor. Over a career spanning seventy years, he starred in some eighty films.

Anne Buydens Douglas built her career in the film industry as a publicist. She met Kirk Douglas during the making of Act of Love (1953) and they married soon after. Anne would become his closest advisor and eventually take the reins as president of their independent production company, Bryna Productions.