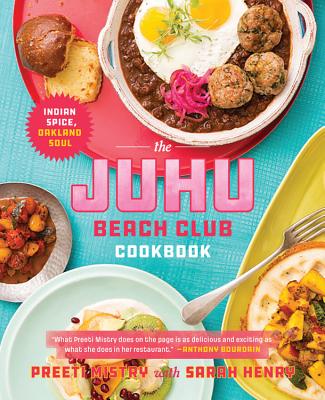 "What Preeti Mistry does on the page is as delicious and exciting as what she does in her restaurant." -- Anthony Bourdain

Influenced by her background as a second-generation Indian -- born in London, raised across the US, now based in the Bay Area -- Preeti's irreverent style informs her personality and her food. This collection of street food, comfort classics, and restaurant favorites blends cuisines from across India with American influences to create irresistible combinations.

Organized by feeling rather than course or season, with chapters like Masala Mashups, Farm Fresh, and Authentic? Hell Yeah, The Juhu Beach Club Cookbook weaves Preeti's culinary journey together with more than 100 bold, flavor-forward recipes to excite and inspire home cooks. Illustrated throughout with full-color photography and playful line art, this book captures the eclectic energy and wide-ranging influences of one of the West Coast's most up-and-coming chefs.

"What Preeti Mistry does on the page is as delicious and exciting as what she does in her restaurant."

"We're huge fans of Chef Preeti. Her personality is as big as the bold flavors and dishes she serves up at Juhu Beach Club. We love that she's changing up what Indian food is all about with her modern, delicious take on Indian street food. She's creative and inspiring and a unique voice on the American food scene."

"At Juhu Beach Club, Preeti Mistry has built a deeply affectionate tribute to the culture of Indian food she grew up with, distilled in this book. Vivid and delicious, Preeti's cooking opens a world that seems distant to most of us, even as it expresses something essential about Oakland, a city where people have long come in search of ground fertile enough to hold deep roots."

With recipes written as deliciously as they taste, The Juhu Beach Club Cookbook has already sent the foodie world into a frenzy well beyond the Bay Area."—-The Washington Blade

Mistry debuts with this stellar collection of Indian-inspired recipes. Her creativity and enthusiasm for Indian cooking is apparent in each recipe. Her energy and passion infuse the entire cookbook, which is as exciting and inspiring to read as it is to cook from.

You may have heard of chef Preeti Mistry from Top Chef. The book is a self-described eclectic collection of recipes, which in this case means it's a hell of a lot of fun. And while you're happily making masala fries and vindaloo chicken wings, you might just realize Mistry is schooling you on how the proper way to use spices at the same time.—-GQ

"Every year, one or two cookbooks come out that feel like old friends. Right now, that book is Juhu Beach Club Cookbook. I'm not Indian, and I've never been to Oakland, but recipes like Peaches and Paneer, or Nimbu Pani lemonade accented with toasted cumin and cilantro speak to my very soul, while all the spice blends and the Rough Pastry Dough recipe are just good reference material. Between all those recipes is Mistry's memoir, which is super-engaging. Maybe that's what makes the book feel so familiar."—-Wine Enthusiast

Preeti Mistry is a chef and activist, known for their restaurants Juhu Beach Club and Navi Kitchen, both formerly in Oakland, CA. Born in London and raised in the United States, the James Beard Award-nominated chef earned their classic culinary credentials in the UK. When Preeti returned to the US, they worked as an executive chef at Google, among other gigs, before launching the pop-up that morphed into their popular restaurant. They live with their wife, Ann, in Northern California.

Sarah Henry is a San Francisco Bay Area-based freelance writer. She is the author of the book Farmsteads of the California Coast (Yellow Pear Press).
Loading...
or support indie stores by buying on