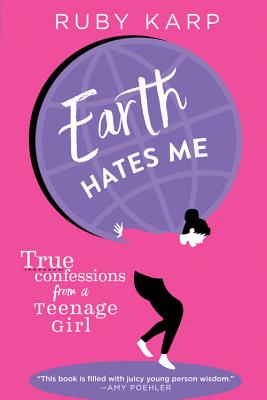 True Confessions from a Teenage Girl

The definitive guide to being a teen in the modern age, with sage advice from a modern teenager and appealing to fans of Rookie.

Earth Hates Me presents a look inside the mind of the modern teenager--from a modern teenager's perspective. Sixteen-year-old Ruby Karp addresses the issues facing every highschooler, from grades to peer pressure to Snapchat stories, and unpacks their complicated effects on the teen psyche.

Ruby advises her peers on the importance of feminism ("not just the Spice Girls version"), how to deal with jealousy and friend break-ups, family life, and much more. The book takes an in-depth look at the effect of social media on modern teens and the growing pressures of choosing the right college and career. Amy Poehler says, "This book is filled with juicy young person wisdom."

With Ruby's powerful underlying message "we are more than just a bunch of dumb teenagers obsessed with our phones," Earth Hates Me is the definitive guide to being a teen in the modern age.

Praise For Earth Hates Me: True Confessions from a Teenage Girl…

"This book is filled with juicy young person wisdom."—Amy Poehler

"Ruby is one of the most intelligent, observant, and daring teens I've ever met. Knowing young women like her exist gives me hope for the future."—Sasheer Zamata, actress and comedian

"I hate Ruby Karp because at 16 she is more emotionally in touch, grounded, and funnier than I am as a full grown adult."—Paul Scheer, actor and comedian

"Karp's conversational narrative is positive, direct, and embedded with a confidence that will appeal to like-minded youth. A thoughtful blend of encouragement and entertaining personal stories."—-Kirkus Reviews

Ruby Karp, a sixteen-year-old feminist, comedian, and journalist, has spoken about feminism on Amy Poehler's Smart Girls at the Party and at TEDx. She hosts a monthly stand-up show at the Upright Citizens Brigade Theatre and has written for HelloGiggles, Mashable, and other publications. Currently, she's trying to make sense of calculus at high school in NYC.
Loading...
or support indie stores by buying on