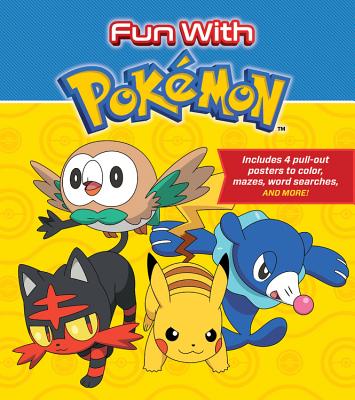 This is the ultimate officially-licensed Pokemon activity book with mazes, word searches, four 18" x 24" posters to color, and more--a must-have for Pokemon Trainers of all ages!


Pokemon fans won't be able to resist this unique format, jam-packed with fun! With four 18" x 24" fold-out posters that feature all of your favorite Pokemon from the Alola region, you can color for hours, and then have fun doing dozens of different activities such as mazes, word searches, decoding messages, and more!

Match the Pokemon to its habitat, help the Pokemon get to its food, and even test your memory with your favorite Pokemon memory game. This ultimate official Pokemon activity book is a must-have for anyone who loves Pokemon!

Simcha Whitehill lives in New York City, but has spent much of her career in the world of Pokemon. A graduate of New York University, she began working on the American show production team, has had a hand in developing games for the brand, and authored of over two dozen books about Ash, Pikachu, and their crew. Like most fans, Simcha shares the mantra, "Gotta catch 'em all." In addition to Pokemon, Simcha has also written for Disney and Nickelodeon.
or
Not Currently Available for Direct Purchase
Copyright © 2020 American Booksellers Association