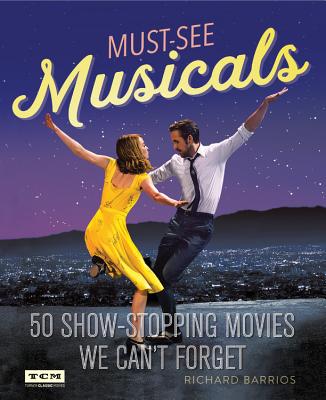 Spanning nine decades and showcasing the most memorable songs, dazzling dancing, and brightest stars ever to grace the silver screen, Must-See Musicals is the guide to the greatest musicals of all time from the most trusted authority on film: Turner Classic Movies.

Movie musicals have been a part of pop culture since films began to talk, over nine decades ago. From The Jazz Singer in 1927 all the way to La La Land in modern times, musicals have sung and danced over a vast amount of territory, thrilling audiences the entire time. More than any other type of entertainment, musicals transport us to marvelous places: a Technicolor land over the rainbow in The Wizard of Oz; a romantic ballroom where, in Top Hat, Fred Astaire and Ginger Rogers dance cheek to cheek; a London theater where the Beatles perform before hysterical crowds in A Hard Day's Night; even to a seemingly alternate reality where eager throngs still throw rice as they watch The Rocky Horror Picture Show. These titles, and many more, show us that a great musical film is a timeless joy.

Covering fifty of the best spanning the dawn of sound to the high-def present, Turner Classic Movies: Must-See Musicals -- written by renowned musical historian Richard Barrios-is filled with lush illustrations as well as enlightening commentary and entertaining "backstage" stories about every one of these unforgettable films.

"This is a delight for anyone who loves musicals."—-Manhattan Book Review

Richard Barrios is the author of the award-winning A Song in the Dark: The Birth of the Musical Film, Screened Out: Playing Gay in Hollywood from Edison to Stonewall, and Turner Classic Movies: Must-See Musicals. He has presented films at the Smithsonian Institute and the Film Forum; appeared in documentary films; and contributed audio commentaries to numerous DVD and Blu-Ray releases. Barrios lives in Beverly, New Jersey.
Loading...
or support indie stores by buying on
(This book is on backorder)