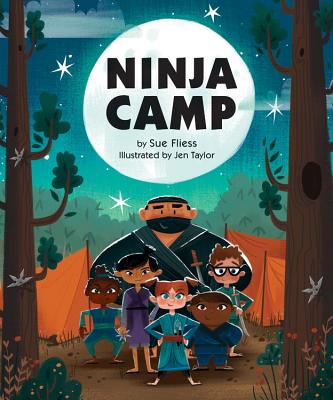 Pack your bags and grab your gear: you're going to Ninja Camp! Listen closely to the ninja master, who will teach you everything you need to know to become a ninja warrior-but it won't be easy. You'll have to be sly and swift, strong and speedy, and only then will you become a Ninja of the Night!

This fun and energetic book will delight and entertain kids and parents alike with its clever, rhyming verse and action-packed depictions of the coolest camp around. For fans of Ninja Red Riding Hood who are looking for a lesson in teamwork and cool stealth skills.

"As could be expected in a book about introductory martial arts, there is solid messaging about working hard, facing your fears, and practicing without complaint that could lend to further discussion on character development. There is also very understated multigendered and multiracial representation among the campers...the coloring is full of wonderfully saturated rusts and blues, and the triumphant story is satisfying."
—Booklist

The snappy, rhyming text will appeal to early readers and read-aloud audiences. A recommended purchase for any library, this book will have kids asking when they can enroll in Ninja Camp!—-School Library Journal

"Sharply metered, power-packed rhymes, many using onomatopoetic slams, bangs, chops, and kicks, suit the concept well...and the action-dense story is illustrated to enhance the text...an original take on the ninja theme in portraying a training camp and inter-camp challenge. There are plenty of page-turning twists throughout, with (no surprise) a happy ending for the young ninja stars."
—Unpacking Picture Book Power

"This book will absolutely speak to the kid who was born with a Bruce Lee poster above his crib. It's for the child who goes through life with kiai on his lips, and stealth in his step; and for the kid who needs the kind of confidence-boost that martial arts offers."—-The Southern Illinoisan

"This rhyming
story reads well and the stylized illustrations are colorful and fun."—Children'sBookwatch, the Midwest Book Review

Sue Fliess is the author of numerous children's books including Robots, Robots Everywhere!, Tons of Trucks, RACE!, How to Trap a Leprechaun, and From Here to There. Her articles and essays have appeared in O, The Oprah Magazine, Huffington Post, Writer's Digest, and more. She's written for Walt Disney and her books have been used in school and museum educational programs. She lives with her family in Ashburn, Virginia, where she often becomes a stealth ninja to sneak in writing time.

Jen Taylor is an artist who loves to draw, illustrate, design, and animate. She attended University of the Arts, where she earned herself a fancy degree! She has worked in the animation industry, but loves the opportunity and creativity that freelance provides. She is living happily ever after with her husband in New Jersey.
Loading...
or
Not Currently Available for Direct Purchase