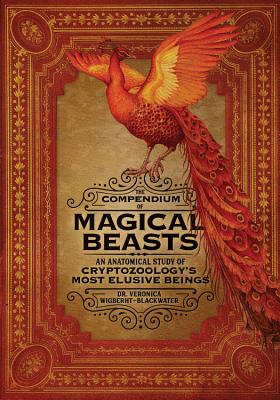 The Compendium of Magical Beasts

An Anatomical Study of Cryptozoology's Most Elusive Beings

From controversial cryptozoologist and explorer Dr. Veronica Wigberht-Blackwater, The Compendium of Magical Beasts is a definitive field guide that explores the history, biology, and anatomy of mythological creatures.

Approaching the fantastic with a scientific eye, Dr. Wigberht-Blackwater explains the history, habits, and biology of each creature's existence with equal attention to detail. Her research is accompanied by stunning scientific illustrations of each specimen's anatomy, providing a comprehensive view of creatures most often dismissed as pure fantasy.

Combining biological fact with folklore, cultural studies, and history, this volume is crucial to science both fringe and mainstream. Locked in a dusty attic for almost a century, Dr. Wigberht-Blackwater's trailblazing work was recently discovered by writer Melissa Brinks, who spent months transcribing the journals she found. Brinks joined forces with artist Lily Seika Jones to digitize the doctor's amazingly detailed anatomical diagrams in order to share these revolutionary findings with the world for the first time.

Trailblazing cryptozoologist and feminist Dr. Veronica Wigberht-Blackwater turned a lifelong interest in folklore and biology into an academic and professional career. After earning her PhD, she traveled the world to research her debut text, What the Locals Know, which presents evidence of the existence of supernatural creatures. That research became the foundation for The Compendium of Magical Beasts. Unable to find a publisher, Dr. Wigberht-Blackwater instead traveled the globe and continued her research for the rest of her life. Veronica's home was in Washington state, alongside a variety of animals, plants, and human companions who shared her love of the fantastic.

Melissa Brinks is a writer and editor for a variety of entertainment sites and publications, including Women Write About Comics. She is co-creator of Fake Geek Girls, a podcast where she talks passionately about the good and the bad of nerdy pop culture. Melissa lives in Arlington, Washington with her husband, two cats, an overgrown pumpkin patch, and dreams of someday keeping bees.

Lily Seika Jones is an artist who creates highly detailed watercolor and ink paintings, taking inspiration from her favorite childhood stories and mid-century illustrators, as well as the natural world of the Pacific Northwest. She does freelance illustration and runs Rivulet Paper Shop on Etsy. Lily is currently based in Shoreline, Washington, where she lives with her husband and their two cats.
Loading...
or support indie stores by buying on