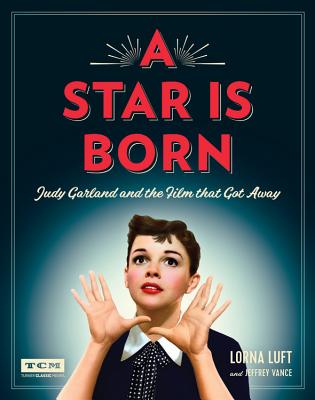 A Star Is Born

Judy Garland and the Film that Got Away (Turner Classic Movies)

New York Times bestselling author and daughter of Judy Garland tells the story of A Star Is Born -- at once the crowning achievement and greatest disappointment in her mother's legendary career. This is a vivid account of a film classic's production, loss, and reclamation.

A Star Is Born -- the classic Hollywood tale about a young talent rising to superstardom, and the downfall of her mentor/lover along the way -- has never gone out of style. It has seen five film adaptations, but none compares to the 1954 version starring Judy Garland in her greatest role. But while it was the crowning performance of the legendary entertainer's career, the production turned into one of the most talked about in movie history.

The story, which depicts the dark side of fame, addiction, loss, and suicide, paralleled Garland's own tumultuous life in many ways. While hitting alarmingly close to home for the fragile star, it ultimately led to a superlative performance -- one that was nominated for an Academy Award, but lost in one of the biggest upsets in Oscar history. Running far too long for the studio's tastes, Warner Bros. notoriously slashed extensive amounts of footage from the finished print, leaving A Star is Born in tatters and breaking the heart of both the film's star and director George Cukor.

Today, with a director's cut reconstructed from previously lost scenes and audio, the 1954 A Star is Born has taken its deserved place among the most critically acclaimed movies of all time, and continues to inspire each new generation that discovers it. Now, Lorna Luft, daughter of Judy Garland and the film's producer, Sid Luft, tells the story of the production, and of her mother's fight to save her career, as only she could. Teaming with film historian Jeffrey Vance, A Star Is Born is a vivid and refreshingly candid account of the crafting, loss, and restoration of a movie classic, complemented by a trove of images from the family collection taken both on and off the set. The book also includes essays on the other screen adaptations of A Star Is Born, to round out a complete history of a story that has remained a Hollywood favorite for close to a century.

Praise For A Star Is Born: Judy Garland and the Film that Got Away (Turner Classic Movies)…

"A Star is Born: Judy Garland and the Film that Got Away is delightfully full of back story for the first four versions. Ms. Luft and Mr. Vance began their collaboration in 2010 and clearly did all it took to get the final product, a gem for Judy Garland fans, as well as for film buffs and Hollywood aficionados. This semi-biographical book is everything you'll ever want to know about Garland's 1954 version but never thought to ask.

Lorna Luft is the daughter of Judy Garland and Sid Luft. She is the author of the bestselling book Me and My Shadows: A Family Memoir (Pocket Books). After making her television debut on her mother's 1963 Christmas special, Luft embarked on her own career as a singer and actress on the stage, film, and TV. She has performed on and off Broadway in Lolita and Promises, Promises; in national tours of Grease and Guys and Dolls; at the Rainbow Room, the Hollywood Bowl, and the White House. Luft lives in Palm Springs, CA.

Jeffrey Vance is a film historian, author, and producer. His books include Douglas Fairbanks (UC Press) and a trilogy of volumes published by Abrams on comedy legends: Chaplin: Genius of the Cinema, Harold Lloyd: Master Comedian, and Buster Keaton Remembered. Vance lives in Los Angeles, CA.Turner Classic Movies is the definitive resource for the greatest movies of all time. We entertain and enlighten to show how the entire spectrum of classic movies, movie history, and movie-making touches us all and influences how we think and live today.