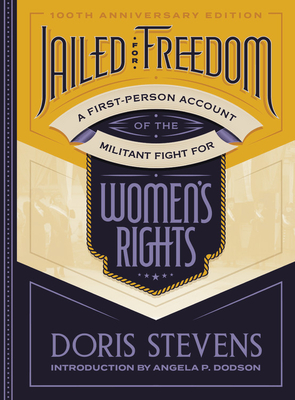 A First-Person Account of the Militant Fight for Women's Rights

The 100th-anniversary special edition of Jailed for Freedom, the essential history and first-person account of the courageous and militant suffragists who fought for their right to vote.
First published in 1920, Jailed for Freedom is the courageous, true story of the militant suffragists who organized some of the first-ever, large scale demonstrations and protests on Washington. At a time when President Woodrow Wilson's administration refused to acknowledge women's voting rights as a tangible issue, the National Woman's Party coalesced, organized, and fought a fierce battle for the ratification of the Nineteenth Amendment with heroism, bravery, and radical vigilance.
What makes Jailed for Freedom especially compelling and such an important contribution to women's history is that it is a personal testimony from a suffragist who persevered through it. With depth and clarity, Doris Stevens details the bravery of the women who picketed daily outside the White House, opened themselves up to ridicule and physical violence, were arrested on no viable charges, jailed when they chose not to pay fines, and even beaten and force-fed when they went on hunger strikes.
Including a new introduction from suffrage historian Angela P. Dodson, author of Remember the Ladies, and accompanied with poignant, archival illustrations, Jailed for Freedom is a tribute to the women and acts it took the pass the Nineteenth Amendment, apropos of radical activism that is still mobilizing in politics today.

Praise For Jailed for Freedom: A First-Person Account of the Militant Fight for Women's Rights…

"Jailed for Freedom is one of the great first drafts of history: a riveting contemporary chronicle of the finale of American women's long fight to win the vote. Doris Stevens' in-the-trenches journalistic memoir of the National Women's Party campaign of protest and pressure -- and the government's response of imprisonment and torture -- was published a century ago, but remains fresh and important today. Angela P. Dodson's excellent introduction places the dramatic events into context; it is essential reading for the suffrage centennial -- and especially vital for a new generation of grassroots activists seeking to spur change."—Elaine Weiss, author of The Woman's Hour: The Great Fight to Win the Vote

"Jailed for Freedom is at once a compelling drama and a field guide for direct action in the cause of justice, as Doris Steven takes the reader into the inner workings of the militant suffragist push during the final decade of the fight for the vote. From the pageantry of parades to picketing the White House to burning the President in effigy, the escalation spawned by disinterest, then opposition, of the Oval Office follows the logical plan of Alice Paul's Woman's Party. First spurned by the public, the activists gained sympathy, then empathy, and finally support as they were attacked by the police, jailed and force-fed. With Angela P. Dodson's new introduction smartly contextualizing the classic, Jailed for Freedom is required reading for the 2020 suffrage centennial and beyond."—Sally Roesch Wagner, founding executive director of The Matilda Joslyn Gage Foundation and editor of The Women's Suffrage Movement

"We welcome this republication of Jailed for Freedom and Angela P. Dodson's introduction; a comprehensive and insightful look at the suffrage story, it details an important chapter in the long struggle to extend democracy to more than half of the American populace."—Lucy Beard, executive director of the Alice Paul Institute

"Doris Stevens was only in her early thirties when she wrote Jailed for Freedom, but she was already a seasoned veteran of the struggle for the vote. Her chronicle of the passion and commitment of militant suffragists still resonates today. This book belongs in every feminist activist's library."—Susan Ware, author of Why They Marched: Untold Stories of the Women Who Fought for the Right to Vote

Doris Stevens was an American suffragist, woman's legal rights advocate, and author. Born in 1888, she was the national strategist for the National Woman's Party and was also the first female member of the American Institute of International Law and first chair of the Inter-American Commission of Women.
Angela P. Dodson is an editor, writer, and consultant. She was most recently a contributing editor for Diverse: Issues in Higher Education and has served as senior editor for the New York Times and executive editor of Black Issues Book Review. She is also the author of Remember the Ladies: Celebrating Those Who Fought For Freedom at the Ballot Box. Angela lives in Trenton, New Jersey.
Loading...
or support indie stores by buying on