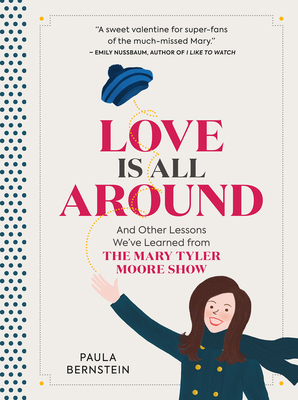 Love Is All Around

And Other Lessons We've Learned from The Mary Tyler Moore Show

A fun and inspirational homage to The Mary Tyler Moore Show --now 50 years after its debut -- with "life lessons" on how Mary Richards serves as an icon and inspiration for generations of women to "make it after all."

When the character of Mary Richards walked into the WJM News Room in the fall of 1970, one of the most beloved shows in television history was born. The Mary Tyler Moore Show would win 29 Emmys over its 7-year run, and would later be lauded as one of the most influential TV shows of all time. Not only that, but Mary Richards would become an icon and inspiration for future generations of women (for example, Oprah Winfrey, Andrea Mitchell, and Tina Fey have all credited Mary with inspiring their careers). Now entertainment writer Paula Bernstein writes this charming celebration of this groundbreaking show, offering not only fun trivia and history, but also the "lessons" we've gleaned, including:

Praise For Love Is All Around: And Other Lessons We've Learned from The Mary Tyler Moore Show…

"A sweet valentine for super-fans of the much-missed Mary."
—-- Emily Nussbaum, author of I Like to Watch

"Bernstein's dazzling and insightful celebration of this pop cultural marvel is pure delight."
—-- Karen Karbo, author of The Gospel According to Coco Chanel

"An affectionate tribute and a genuinely informative cultural history -- and an all-around triumph."—-- Meghan Daum, author of The Problem With Everything: My Journey Through The New Culture Wars

"As entertaining as Chuckles the Clown's funeral. If you're a fan of the show, you'll know that's high praise."
—-- Michael Schneider, Variety

"The Mary Tyler Moore Show is a classic because it remains as relevant and delightful today as it was when it was brand new. This carefully researched and bouncily written book makes it very clear that there were real human truths below the entertainment and the laughs. Toss your hat high and enjoy!"
—-- Shawn Levy, author of Paul Newman: A Life

"A compulsively readable history of a classic TV show . . . Bernstein's book brilliantly breaks down how jokes and plotlines from the Me Decade still hold life lessons for those of us trying to survive in modern times."
—-- Josef Adalian, New York Magazine's Vulture

Paula Bernstein is a journalist who regularly contributes to Fortune Magazine, where she reports on the entertainment business. She has held positions at Indie Wire, Variety, and The Hollywood Reporter, where she reported on television business news, and her work has appeared in Fast Company, TV Guide, The New York Times, Adweek and many other publications. She is also the author of Identical Strangers: A Memoir of Twins Separated and Reunited. Visit her at paulabernstein.com
Loading...
or support indie stores by buying on